A QUESTION OF BALANCE 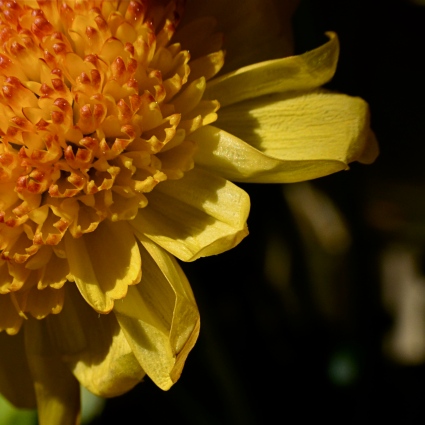 Reporting that beauty exists is also a kind of “journalism”.

WITH PAINTING AS ITS INITIAL INFLUENCE, THE YOUNG ART OF PHOTOGRAPHY spent its first years trying to record transcendent scenes of the world, from landscapes to portraits,  in much the same elegant, poetic way that such subjects were translated to the canvas. Partly due to the limits of early exposure media, the task of making a picture was slower in those first years, almost a contemplative act. And so, in pace and mood, the strange new machine seemed intent on imitating its painterly elder, at least in part to make the argument that even a machine could be imbued with an artist’s eye.

Then came faster film and faster events. The images of war and the advancing grind of city life coincided with the introduction of more responsive films. The snapshot, the ability to catch an accelerating world on the fly, became commonplace. Photography took on a new role as reporter’s tool, a way to visually testify to human problems and their impacts. Photojournalism, in turn, gave way to commerce, which created an image bias in news coverage that persists to the present day. Photos take their tone from the needs of the marketplace. Tragedy outsells beauty. If it bleeds, it leads. Pulitzer prizes aren’t awarded to people who make pictures of daffodils.

And yet, there is a greater need for pictorial beauty than ever before, simply so that our visual diet doesn’t consist solely of red meat and blood. Certainly, the sensational holds tremendous sway over what gets published, re-printed, re-tweeted. The images that stamp themselves on our brains hold many traumas and dramas. Admittedly, some have sparked outrage, which in turn spurs action, and that can be a good thing. But photography can make us hard and jaded as well, and we dare not squeeze beauty into the margins of our consumption. Pictures shape feelings, and they can also condition us to feel less and less about more and more.

From Lewis Hine’s harrowing pictures of children in cotton mills to present-day iPhone dispatches from the latest repressions or riots, photographs are the seismograph of our collective consciences. But just as man cannot live on bread alone, he cannot subsist solely on nightmares. Beauty, harmony, aspiration, hope….we need to capture all these as well, lest, under the barrage of the shell and the bullet, the butterfly is blasted into extinction.

It’s a question of balance.

FOR A LIMITED TIME ONLY 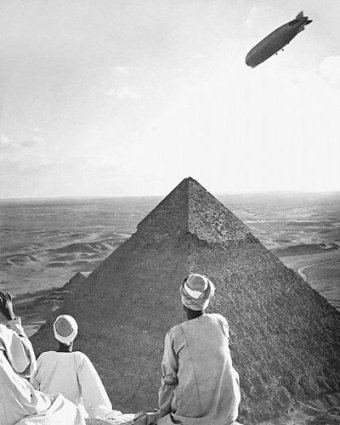 When Worlds Collide: The Graf Zeppelin cruises over the great pyramids at Giza, 1931.

ONCE WE WERE ABLE TO CAPTURE LIGHT IN A BOX, in the earliest days of photography, there seemed to be a worldwide obsession with recording things before they could vanish. Painters might linger in a wistful sunset over a craggy shoreline, and certainly that was part of the photographer’s prerogative as well, but, immediately following the introduction of the first semi-portable cameras, there was a concurrent surge in the recording of the ancient world…temples, churches, monuments, pyramids, waterfalls, Africa, Asia, empires new and old.

The nineteenth century saw an explosion in the number of world tours available to at least the wealthy, as seen in The Innocents Abroad, Mark Twain’s chronicling of a global excursion of Americans to the venerable ports of the old world. Cartes-de-visites (later post cards), stereoscopic views and leather-bound books of armchair photo anthologies sold in the millions, and the first great urban photographers like Eugene Atget began to “preserve” the vanishing elements of their world, from Paris to Athens, for posterity and, quite often, for profit.

This first-generation fever among shooters carried forth through two World Wars, the Great Depression, and into the journalistic coverage of revolutions and disasters seen in the present day. The photographer is aware that this is all going away, and that bearing witness to its disappearance is important. We can’t help but realize that the commonplace is on its way to becoming the rare, and eventually the extinct. We can’t know what things we regard as banal will eventually assume the importance of the contents of the pharaoh’s tombs. Ramses’ everyday toilet items become our priceless treasures. Now, however, instead of sealing up pieces of the world in pyramids, we imprison the light patterns of it, with history alone to judge its value.

Making pictures is taking measure of our world. It is our voice preserved for another time. This is what we looked like. This is what we thought was important. This shows the distance of our journey. New worlds are always crowding out old ones. Photography slows that process so we can see where one curtain comes down and another rises.