WE ARE ENTERING THE ANNUAL SEASON OF ENHANCED BELIEF, that sadly brief period during which we temporarily suspend many of our most cynical operating procedures, erring on the side of hope. Religion is most probably the root cause of much of this uptick in outlook, although plenty of us  experience additional “buy in” to the world’s best possibilities in ways that transcend creed or calling. Photographers, too, approach the world through slightly rosier glasses, especially as it regards the season’s main repositories of belief, children.

Of course, belief isn’t really a seasonal thing with kids: it’s more like their home territory, their native base of operations. Long after adults learn not to hope for too much, years after we’ve taught ourselves to lower or tamp down our expectations, new generations of kids are factory-preset to imagine what if, and wouldn’t it be cool? Magic isn’t an aberration for a child but a basic law of the universe. If a kid can dream a thing, he or she generally believes that it can, and should, come true. Photographers see this “buy-in” manifest in every child’s game, every cardboard box made into a makeshift rocket ship. And images that capture that wonder are among the most heart-warming of this or any season.

The young man you see here is dead serious about his idea of fun. He made the mask and cuff he’s wearing with his own hands, but that doesn’t render them any less miraculous. Once he’s put them on, he’s ready for reality to be altered into something useful, something fanciful. It doesn’t take much. Mom’s bath towel becomes Superman’s cape: a sock pulled over your hand becomes a sidekick, right down to his button eyes. And, apparently, there’s no disconnect between the space garb on his head and wrist and his regular dinosaur t-shirt. Consistency is for grown-ups, bah humbug.

Pictures like this are a gift because they remind us of having already received a far bigger one; the gloriously indomitable ability of a child to will dreams into life. Mom and Dad may check in and out of the zone of belief, but kids rule the realm. 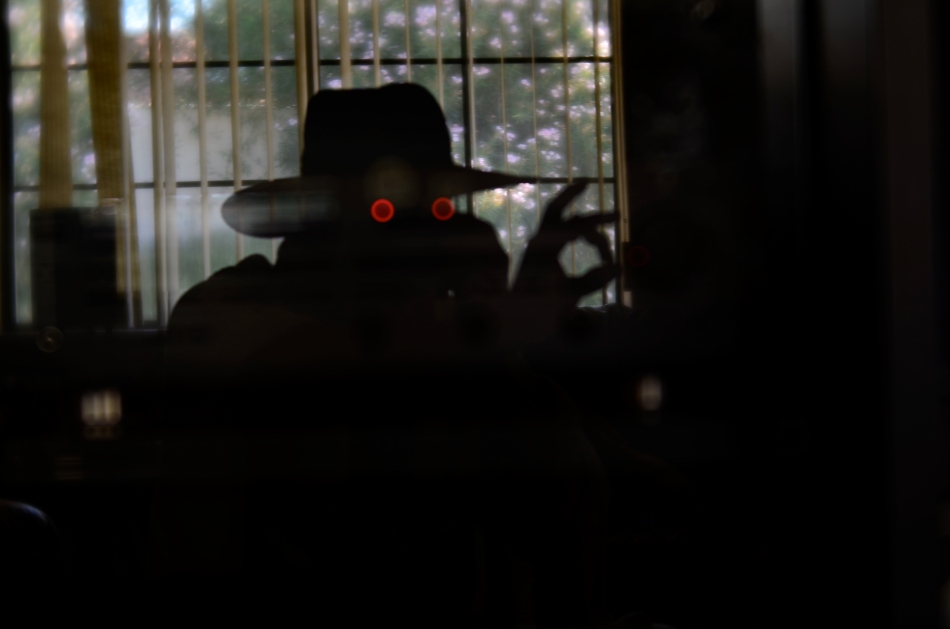 Start fooling around and see where it leads. It isn’t wasting time, it’s investing it.

PUTTERING SUFFERS A BAD REPUTATION, coming somewhere on the disreputability scale between “screwing around” and “just passing the time”, poking an insolent finger in the eye of the Puritan work ethic. The headmaster’s voice echoes from the land of Hard-Won Wisdom: Time is money. Make something of yourself.  Whattaya gonna do, waste the entire day?

Yeah, replies the photographer within you. Thought I might….

Making a picture isn’t the same process as building a bridge. You don’t always end the project with the same aims as you began with. Like any other artistic enterprise, the answer might come in the journey, rather than the destination. And a photographer, caught in mid-creation and asked, “what you doing?” should be quite comfortable answering, “you know, I’m not really sure yet…”

The above image is a total exercise in “let’s see what happens if I do this“, and at no time in the making of it did I have a set plan or firm objective: I just did know when to stop, but everything else was negotiable in the moment. I wasn’t wasting time: I was investing it.

At first, I was trying to take a picture of my back yard, which over my shoulder, as it was reflected in the glass cabinet door in front of me. I was about to kill the power on the amplifier on a shelf behind the door when a test shot revealed something unusual. At my chosen aperture, the amp’s two red LEDs weren’t reading as sharp points of light,  but as diffuse outer circles surrounding soft inner circles, almost like a pair of feral eyes. And at that point, the garden scene slowly started to take a back seat.

Shooting the glass door at a slight angle made my body register as a reflection, while shooting straight on turned me into a silhouette, which would become handy. Now that I was just a shape, I could be anything, so I positioned myself to where the dots indeed appeared to glowing, spooky eyes. Shooting with my right hand, my body details now masked by shadow, I crossed my left hand over beyond the right edge of my body, posing it to look as if I were stealing something, or perhaps twisting the dial on a combination safe. Having thus established the behavior for the character I was now creating, I grabbed my wife’s garden hat and threw a bed blanket around my shoulders for some sinister atmosphere. Click and done, with my newly imagined Phantom Blot plotting his way into the house. I didn’t know the whole story, but I knew when to stop playing. Total time investment: five big minutes.

You won’t always have an organized blueprint for a picture when you set about making one. Besides, if you confine yourself solely to the familiar when shooting, eventually all of your photos will start to resemble each other, and not in a good, “cohesive body of work” way.

Screw with the formula. Embrace the uncertain.