CALM AT THE CENTER

ALL OF WHAT WE CALL “EFFECTS” LENSES can additionally be used as “art” lenses, but they can also, for a photographer, merely be a way of saying, “hey, look at the cool trick I learned!” In what and how we shoot, we draw the line between “showing something” and just showing off.

Since no single lens can produce every desired optical look, we swap out speciality glass to get the effect we want in a given image. But is the final picture complemented or defined by that effect? Is the photograph “about” how close you zoomed in, or what you zoomed in to see? Did you shoot with a stereoscopic lens just to demonstrate 3D, or is there some deeper understanding of your subject achieved with the added sensation of dimensionality? You see where this is going: the yin and yang between calling on technique and calling attention to that technique for its own sake. 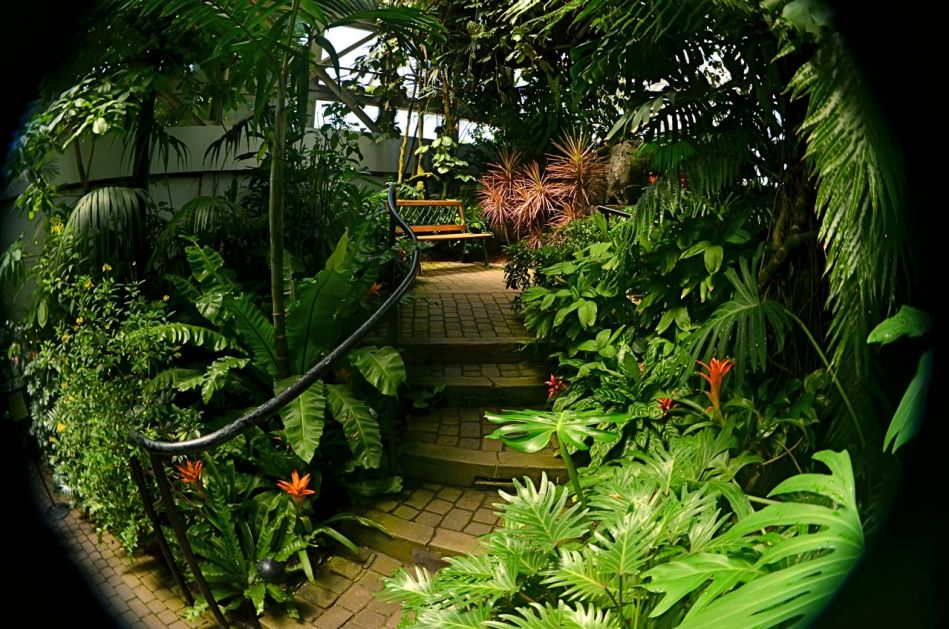 In trying to be mindful of this either/or way of using effects gear, from macro filters to pinhole lenses to ultra wides, I try to use some of them counter-intuitively, forcing them to tell stories in ways that go beyond the obvious. One such lens, and one which comes with its own set of pre-conceptions and biases, is the fisheye, which, for many, never left the bendy realm of psychedelic album covers and black-light posters, time-locked somewhere between Warhol and Peter Max. However, even in the most exaggerated fisheye shots there is the opportunity to create what I call “calm at the center”….an area roughly one third of the total frame where distortion is either muted or completely absent.

When a compelling and more normally proportioned middle is built into your shot, such as the stair steps leading toward the bench in this greenhouse shot, the bending that increases toward the outer edge of the shot can act as a framing device that leads the eye to your chief focus. The emphasis can then be placed on what is not distorted rather than what is. The fisheye lens is thus used to call attention to what it’s serving in the picture, rather than calling attention to itself.

Does this shot deliver what I was seeking? That’s for others to judge: the only thing I can be sure of is my intention, after all. Effects lenses are not automatically art lenses, any more than every camera owner is automatically a photographer. Results, finally, are the best testimony.