Wall Be Right There, 2022. As soon as I snapped this, something about it seemed familiar…

I CANNOT IMAGINE MAKING PHOTOGRAPHS without having someone sitting on my shoulder.

Not a squirming kid hitching a piggyback ride at a theme park: I’m talking about the invisible presence of photographers past, those influences that are so strong that you might imagine you can see their faces as you peer through the viewfinder. Men and women whose approaches so strongly flavor your own view of the world that it can be difficult not to directly channel them into your work.

Of course, we often deliberately pay tribute to those who’ve gone before us. We might purposefully re-interpret their works, or, in our moments of maximum hubris, even convince ourselves that we can improve on them. But in many more cases, their power, as teachers, to mold our perceptions leaks out quietly, buried inside what we assume is our own “original” style. We might not be actively trying to emulate or steal, but, once we back off from this image or that, we have to admit that the fingerprints of one or another of our photo gods can be clearly detected. 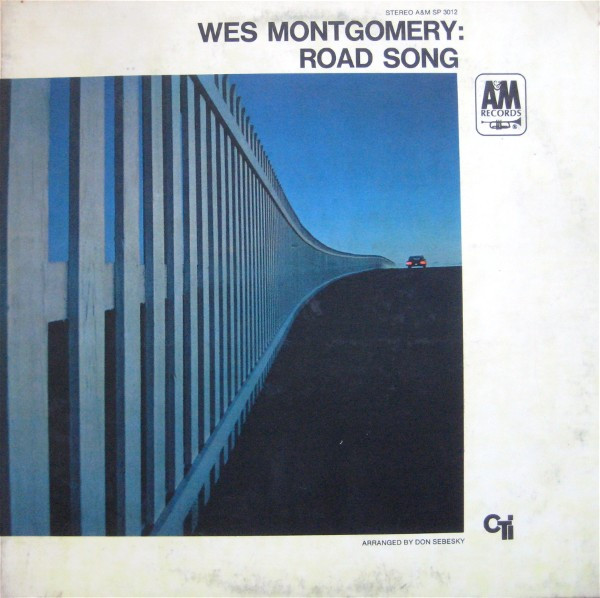 That’s what happened to me on a recent walk to a nature preserve. The walking path parallels a long support wall that stands beneath a traffic overpass, giving it that receding-into-infinity look, and something about the composition appealed to me, although I was not consciously thinking of any particular artist’s work. A door just opened in my head and I said yes.

Later, when I was correcting and cropping the shot, its inspiration finally hit me, as I recalled the legendary Pete Turner’s cover shot the the album Road Song by Wes Montgomery, shot in the late 1960’s. Pete created nearly all of the album covers for jazz producer Creed Taylor’s CTI label of the period, most of them abstract in nature with no direct link to either a song or record title. This shot, with his wondrous wide-angle framing a barrier trailing off to the horizon in a bluish dusk, with only the tail lights of a distant car to anchor the wall in real space, was, and is, a masterpiece, the kind of highly commercial, mass appeal masterpiece that he regularly (and seemingly effortlessly) knocked off for hit records by Antonio Carlos Jobim, Deodato, Hubert Laws, Freddie Hubbard, and George Benson, releases that added a stunning visual signature to the Boomer generation’s definition of jazz.

By comparison, my unwitting tribute to Pete, which basically happened on a subconscious level, was fairly cluttered and thus nowhere near as direct in its impact, but I was happy, rather than sad, that at least a part of my love for his work had sneaked into my own. I couldn’t fill his shoes, certainly, but it was fun to even accidentally slide a few toes into his slippers.