OVER THE NEARLY SEVENTY-YEAR HISTORY of the legendary View-Master, showing generations “seven more wonders of the world” with each fresh reel of views, the format has been used to depict everything from targeting exercises for sharpshooters in World War II to detailed cut-aways of the human body for anatomy students. And of course, VM’s two mainstays of popular appeal persist to this day: armchair tours of the globe’s greatest attractions and an endless variety of children’s titles, including scenes from tv shows, movies, and, most prominently, fairy tales.

View-Master’s original headquarters in Portland, Oregon operated mainly to print, duplicate and package the views taken by its roving band of freelance scenic photographers. However, there was one part of the plant that created special, homegrown bits of pure fancy within the factory walls: the company’s legendary “table-top” studios. Here were created wondrous dioramas of everything from Cinderella’s castle to the Emerald City, built to scale and populated by tiny princesses, heroes, animals, and storybook legends. The range of product, from the Grimm Brothers to Disney, was not, as in later years, just frozen animation cels but solid clay art figures, lovingly created by a select staff of model makers and photographed in 3-d Kodachrome images for the children’s division. Later on, corners were cut, budgets were slashed, and View-Master’s worlds of wonder became the stuff of legend, not to mention keen interest among collectors. 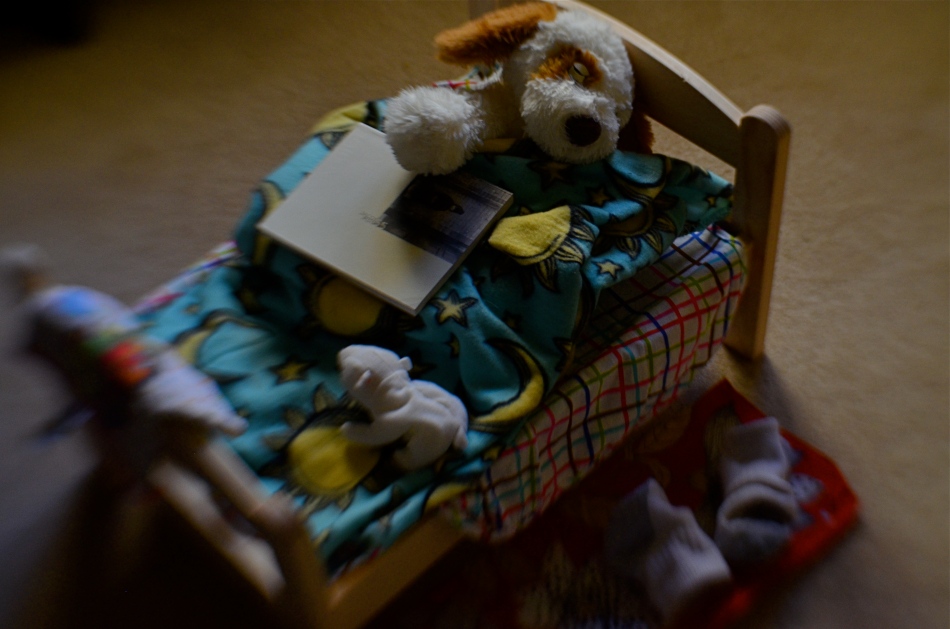 Every once in a while, I take a crack at an imaginary scene that the wizards of Portland might have dreamed up, such as the concoction you see here. The stuffed dog and miniature bed had both been purchased to help the sole survivor of a quartet of rabbits get over her grief at being the Last Bunny Standing, but both props had been rejected out of hand. Turns out she rather liked having all the room, grub and water to herself, so she retired her black armband within twenty-four hours without a backward glance.

Walking by the two blacklisted toys each day, I started to imagine the dog as a small child, and wondered what his night-time retiring ritual might be, from the book that eased him off to Dreamland to the socks shed by the side of his bed. Ten minutes of prep and I was ready to shoot my tribute to the days when clay models transported us all from mere reality into View-Master’s exquisite realms of possibility. Days are often arranged in too straight a line. At such times, a slight detour into daydreaming is all you need to render the journey a little more worthwhile.

THE ART OF MESSING ABOUT WITH THE MIND’S CONCEPT OF SIZE, making the small look large, has been part of photography since the beginning, whether it’s been crafting the starship Enterprise at 1/25 scale for primitive special effects or making Lilliputian mockups of Roman warships for a sea battle in Ben-Hur. Making miniatures a convincing stand-in for full-size has been a constant source for amazing images.

Oddly, there has also been a growing fascination, in recent years, with using new processes to make full-sized reality appear toy-like, as if Grand Central Station were just a saltine box full of HO-scale boxcars. Seems no one thinks things are as they should be.

This turnabout trend fascinates me, as people use tilt-shift and selective-focus lenses, along with other optics, to selectively blur and over-saturate real objects taken at medium or long distances to specifically create the illusion that you’re viewing a tabletop model. Entire optical product lines, such as the Lensbaby family of effects lenses, have been built around this idea, as have endless phone apps and Photoshop variants. We like the big to look small just as much as we like the teeny to look mighty. Go figure.

Lefz Lim brings it on down to Tiny Town, converting a real city scene to a mock miniature.

And who can resist playing on both sides of the street?

The image at the top is the usual fun fakery, with my tiny-is-full-size take on the marvelous diorama made for the Musical Instrument Museum (the crown jewel of Phoenix, Arizona), which reproduces a complete symphony orchestra in miniature. This amazing illusion was created using a spectacular photo system that creates a 360-degree scan of each full-sized player, maps every item of his features, costume, and instrument, then converts that scan to a 3-d printed, doll-sized version of every member of the symphony. To read about this awesome process, go here.

As for making regular reality look like Tiny Towns, we offer the image at the left, taken by photographer Jefz Lim as part of his online tutorial on the creation of the “model” effect. We are in the age of ultimate irony when we deliberately try to palm off the real as the fake. The “how” of this kind of image-making is basic focus-pocus. The “why” is a little harder to put your finger on.

Size does matter. Ah, but what size matters the most…..that’s your call. 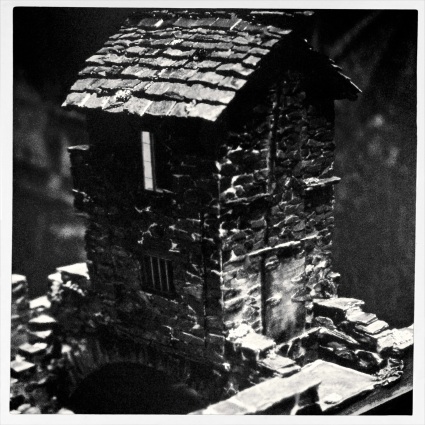 You and Scooby and Shaggy meet us at the old dark house: one of the many great exhibits at Tucson’s Mini-Time Machine Museum of Miniatures.

EVER SINCE GULLIVER GOT HIMSELF HOG-TIED BY LEGIONS OF LILLIPUTIANS, we have been fascinated with the contrast between the VERY BIG and the VERY..small. The history of photography is pretty peppered with its share of dinky dioramas, miniature models and teensy-weensy mockups and the cool pictures they inspire. On the silver screen, still photography’s stepchild, the motion picture, launched the careers of thousands of miniaturists in its first half century, genius modelers who could create Tokyo on a tabletop, then have a guy in a rubber Godzilla suit reduce it to splinters.

In another vein, kidlings that were 3-D fans also got their tiny on during the decades that the makers of View-Master told fairy tales in stereo, not with animation cels, but with their own separate miniature studios at the company’s HQ in Portland, doing so-close-you-can-touch-it takes on everything from Donald Duck to the Wizard of Oz. And photographically, the idea was always the same: make this look like the real thing.

Oddly, in recent years, there’s been a bit of a double-reverse going on with miniatures with the creation of optics like the Lensbaby, a low-fi version of a tilt-shift lens that throws selective parts of the frame out of focus, allowing you, according to Lensbaby fans, to take a normal street scene and “make it look like a miniature model”. At this point we leave Photography class and walk down the hall to Irony 101, in which we learn that it’s cool to make something real look fake. Seriously.

I always feel like a sneak trying to make a fake thing look real, and now, it seems, I’m off the hook, since it’s not about the fakery but how cool we all agree we are in doing it (okay, I need to think about that one for a bit). In the meantime, consider a visit to one of the world’s most amazing collection of all things small and awesome at the Mini-Time Machine Museum of Miniatures in Tucson, Arizona. This place makes a large impression, one little object at a time. Photograph away to your heart’s content (no flash), and make the fakes look real, or fanciful, if you’re in the cool kids group. Either way, it’s big fun (that was the last one, I swear).