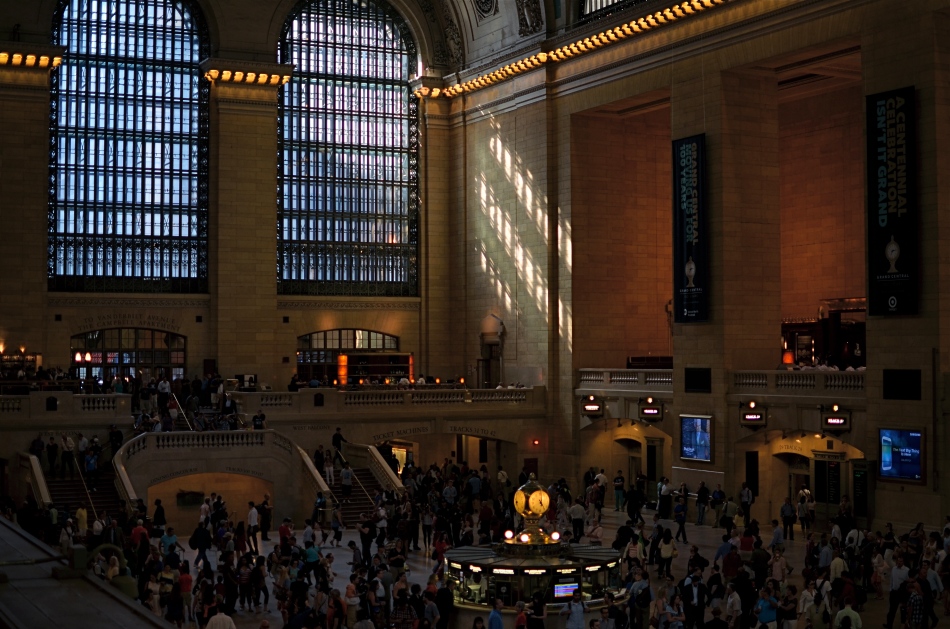 AMERICA’S ROMANCE WITH RAIL TRAVEL MAY NOW JUST BE A SORT OF CASUAL ACQUAINTANCE  (hey, we can still be friends), but the temple which sparked much of the old love between man and train still throbs with life. At 100, Grand Central Terminal (don’t, they beg, call it a station) still delights the eye of even a jaded New Yorker with the sheer scale of its vision. Over 750,000 people per day file through its platforms, shops and restaurants, and, of course, its commuter connections.

As to the era when the terminal truly connected the entire nation, the inevitability of the building as a final destination was never better captured than in the opening for the old network radio series named for it:

As a bullet seeks its target, shining rails in every part of our great country are aimed at GRAND CENTRAL STATION, heart of the nation’s greatest city.

Drawn by the magnetic forces of the fantastic metropolis, day and night, great trains rush toward the Hudson River…..sweep down its eastern bank for one hundred and forty-three miles…..flash briefly by the long, red row of tenement houses south of 125th street…..dive with a roar in to the two and one-half mile tunnel that burrows beneath the glittering swank of Park Avenue…and then…..GRAND CENTRAL STATION!!!!

Shooting the terminal is a bit of an alluring trap, since we all want the wider-than-wide, one-shot glama-panorama that takes in every window, skylight, side stall, commuter, ceiling detail and kiosk. The trap is in becoming so wedded to that shot that we forget about all the smaller dramas and details that would be lost within those gigantic, where’s-waldo mega-frames. On my latest trip there, I had been avoiding the usual wide-angle mania that is all too easy to surrender to, in shooting New York, traveling with only a 35mm prime lens and forcing myself to shoot smaller, more intimate subjects. Primes have normal, human-eye proportions, rather than the distorted stretch of a wide-angle, and cannot zoom. Therefore, shooting inside Grand Central meant:

I couldn’t even dream of getting everything in a single shot, meaning a select part of the story had to be chosen over a “master shot”.

I would have a lens that’s incredibly fast and sharp, so I could take advantage of the terminal’s vast interior (275 ft. long, 120 ft. wide, 125 ft. high) a space that is still largely illuminated by east-west natural light.

When I arrived, the golden glow of mid-afternoon was gently warming its way through the 75-ft-high arched windows on the terminal’s west side. I avoided shooting toward the east, since it currently features large “1-0-0” anniversary numerals in the three windows, plus the new Apple store, both of which I regard as barriers to visual enjoyment of the building. Go time: I settled on 1/200 second, ISO 160, wide open at f/1.8 (sharp to infinity since I was shooting from the diagonal opposite of my subject…we’re talking looong distance) and I kept one of about twenty frames.

Lenses, no less than subjects, are about decisions. You choose one thing and un-choose all other options.

And let the sun shine through.

For more history on the terminal, check out this article, courtesy of Gotham magazine:

BEYOND THE PATH OF THE GLACIER

IN AMERICA WE GET ACCUSTOMED TO SEEING OUR URBAN HISTORY REGULARLY REDUCED TO RUINS, not because our cities are laid to waste by invaders or sacked by conquerors, but because we are such paltry stewards of the architectural legacies we share in this essentially young nation. Obvious nationalistic images aside, the wrecking ball, our answer to the crushing glaciers of history, is the real visual signature of the USA. We get tired of looking at old stuff. We knock the old stuff down. And in doing so, we squander the value of things to which we once attached great importance, rendering them moot, as if we really never cared about them at all.

The change glacier usually sweeps through the vast canyons of our larger cities, cutting a swath of wreckage that levels, implodes or simply knocks down any testimony to history, fashion, flair, whimsey, and the thing we most dread, uselessness. Every town has its casualties; stadiums, grand hotels, transportation hubs, retail centers, neighborhoods…it’s simply not American to get too attached to anything. It’s all going away, all of it, and with it, any sense of continuity, memory, or a contextual place in time.

Fortunately, it is the tendency of the glacier to “think big” that keeps the crushing onslaught of “renewal” concentrated in the larger urban centers, often leaving more survivors in small towns and rural communities. That means that some things in off-track towns, being below the radar of macro-change, are simply left alone, allowed to survive, because they are neglected by the bigger sweep of things.

This means that the “in-between” parts of the country still hold some treasures, a few gentle ties to times we have largely disposed of in the major hub cities. And while no one is suggesting that we bring back the village blacksmith and the local cobbler’s shop, it’s comforting in some way to be able to see and touch what in other parts of the nation are merely footnotes in books. That is, if we haven’t burned the books.

The building pictured at the top of this post is such a survivor. Built in 1879 just as the Toledo & Ohio Central railroad was being cut across the small village of Pickerington, Ohio (just southeast of Columbus), this compact little structure was the nerve center of trade and travel for “Picktown” for more than half a century. Its three rooms included an entry area for freight, an arrival room for passengers, and, in the center, an office for the combined jobs of depot agent and Western Union telegrapher. It was not until the hiring of its first female depot agent in 1947 that the facility could boast indoor plumbing, but the T&O’s tracks, during rail’s heyday, criss-crossed the tiny town with spur lines to a lumberyard, a grain mill, a hoop factory and warehouses.

Amazingly, the depot survived an extended closure from 1958 to 1975, when private money made its restoration possible. Lanterns, tools, bottles, wall maps, schedules, freight wagons, and a fully functional Western Union telegraph key were all assembled to visually cement the station in time. And there it stands to this day, serving no other “function” than to mark where the town, and we, have passed on our way to the inevitable.

Better than my luck in finding this place was in finding it just as dusk was streaking across the sky, giving me the perfect visual complement to the passing of time. And yet, here, out of the path of the glacier, time was allowed to tick just a little slower, slower enough to teach. And remember.