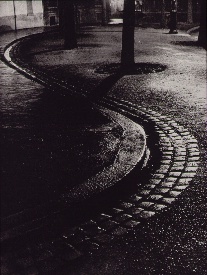 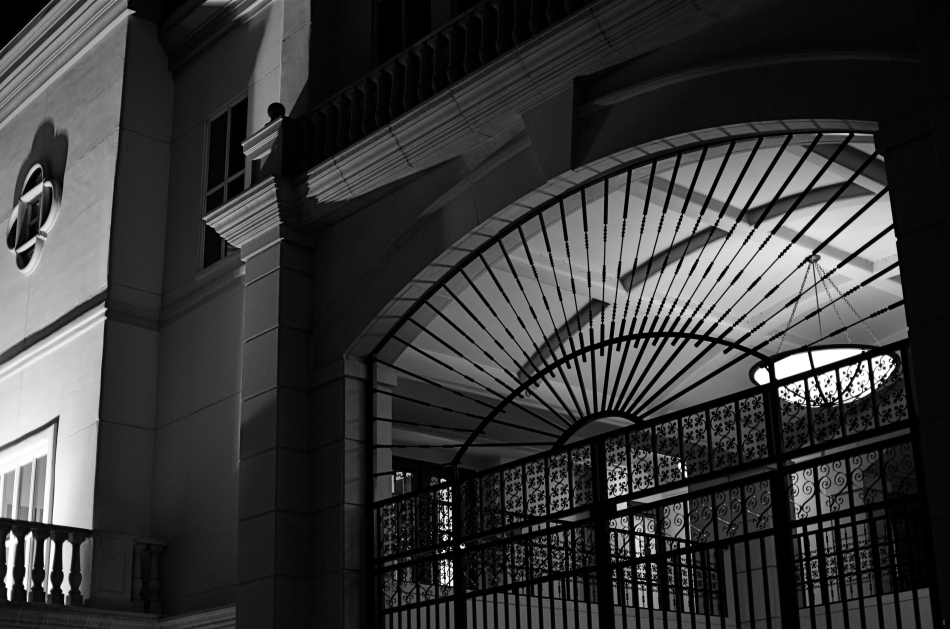 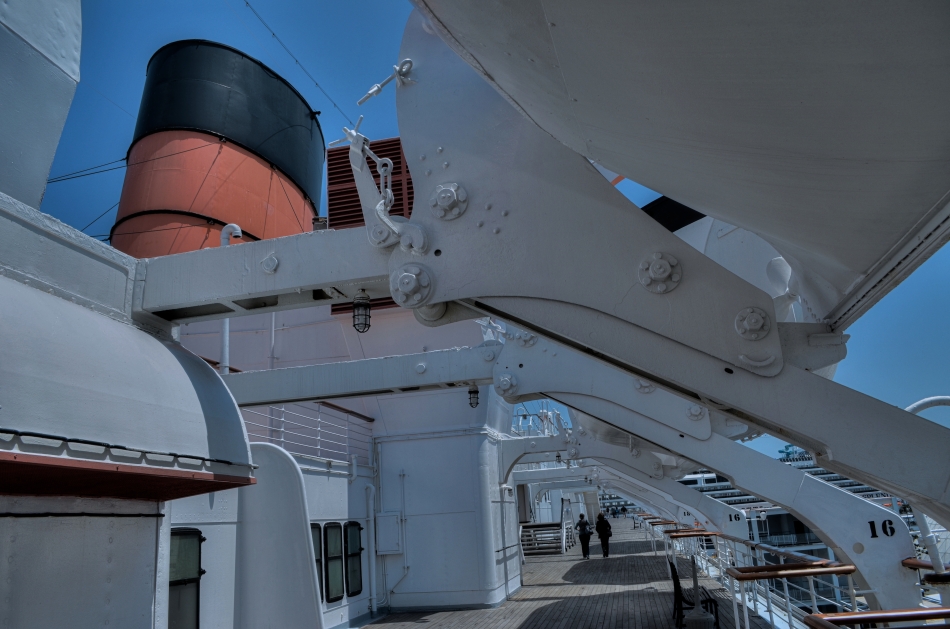 Which image better conveys the romantic era of the Queen Mary, the wide-angle shot along the promenade deck (above), or a detail of lights and fixtures within one of the ship’s shops (below)? 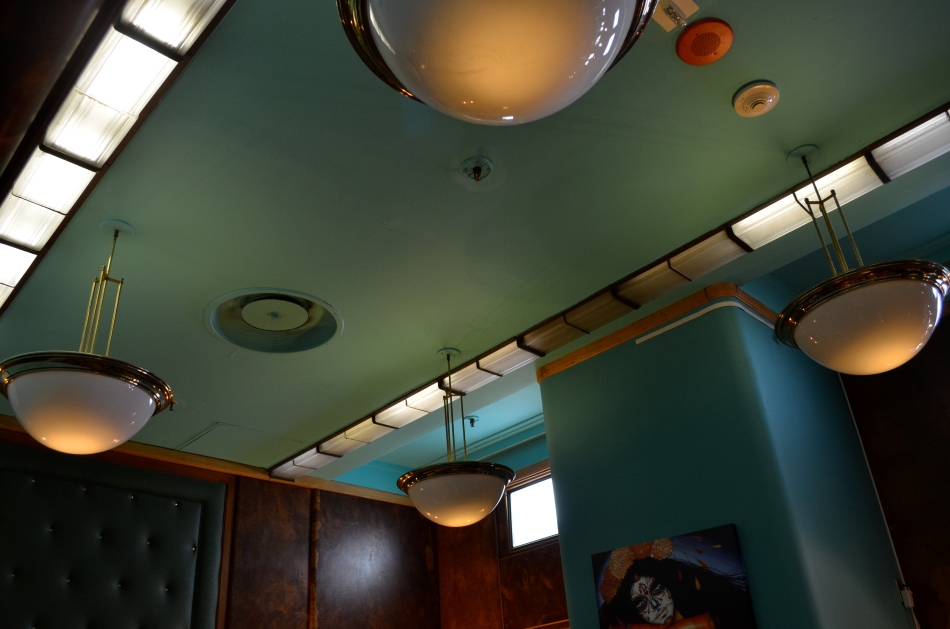 THE VERY APPEAL THAT ATTRACTS HORDES OF VISITORS to travel destinations around the world, sites that are photographed endlessly by visitors and pilgrims alike, may be the same thing that ensures that most of the resulting images will be startlingly similar, if not numbingly average. After all, if we are all going for the same Kodak moment, few of us will find much new truth to either the left or right of a somewhat mediocre median.

In a general sense, yes, we all have “access” to the Statue of Liberty, the Grand Canyon, Niagara Falls, etc., but it is an access to which we are carefully channeled, herded, and roped by the keepers of these treasures. And if art is a constant search for a new view on a familiar subject, travel attractions provide a tightly guarded keyhole through which only a narrowly proscribed vantage point is visible. The very things we have preserved are in turn protected from us in a way that keeps us from telling our subject’s “big story”, to apprehend a total sense of the tower, temple, cathedral or forest we yearn to re-interpret.

More and more, a visit to a cultural keepsake means settling….for the rooms you’re allowed to see, the areas where the tours go, the parts of the building that have been restored. Beyond that, either be a photographer for National Geographic, or help yourself to a souvenir album in our gift shop, thank you for your interest. Artistically speaking, shooters have more latitude in capturing the stuff nobody cares about; if a locale is neglected or undiscovered, you have a shot at getting the shot. Imagine being Ansel Adams in the Yosemite of the 1920’s, tramping around at will, decades before the installation of comfort stations and guard rails, where his imagination was only limited by where his legs could carry him (and his enormous and unwieldy view camera, I know). Sadly, once a site has been “saved”, or more precisely, monetized, the views, the access, the original feel of its “big story” is buried in theme cafes, commemorative shrines, info counters, and, not insignificantly, competition with every other ambitious shooter, who, like you, wants a crack at whatever essences can still be seen between the trinkets and kiosks.

On a recent visit to the 1930’s luxury liner RMS Queen Mary, in Long Beach, California, I tried with mixed results to get a true sense of scale for this Art Deco leviathan, but its current use as a hotel, tour trek and retail mall has so altered the overall visual flow that in some cases only “small stories” can effectively be told. Steamlined details and period motifs can render a kind of feel for what the QM might have been before its life as a kind of ossified merchandise museum, but, whereas time has not been able to rob the ship’s beauty, commerce certainly nibbles around its edges. 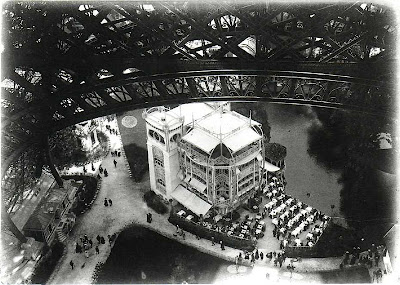 Sometimes you win the game. I recently discovered the above snapshot of the Eiffel Tower, taken in 1900 by the French novelist Emile Zola, where real magic is at work. Instead of clicking off the standard post card view of the site, Zola climbed to the tower’s first floor staircase, then shot straight down to capture an elegant period restaurant situated below the tower’s enormous foundation arches. And although only a small part of the Eiffel is in his final frame, it is contextualized in size and space against the delicate details of tables, chairs, and diners gathered below, glorifying both the tower and the bygone flavor of Paris at the turn of the 20th century.

Perhaps, for a well-recorded destination, the devil (and the delight) is in the details. Maybe we should all be framing tighter, zooming in, looking for the visual punctuation instead of the whole paragraph. Maybe all the “little stories” add up to a sum greater than that of the almighty master shot we originally went after. Despite the obstacles, we must still try to dictate the terms of engagement.

One image at a time. 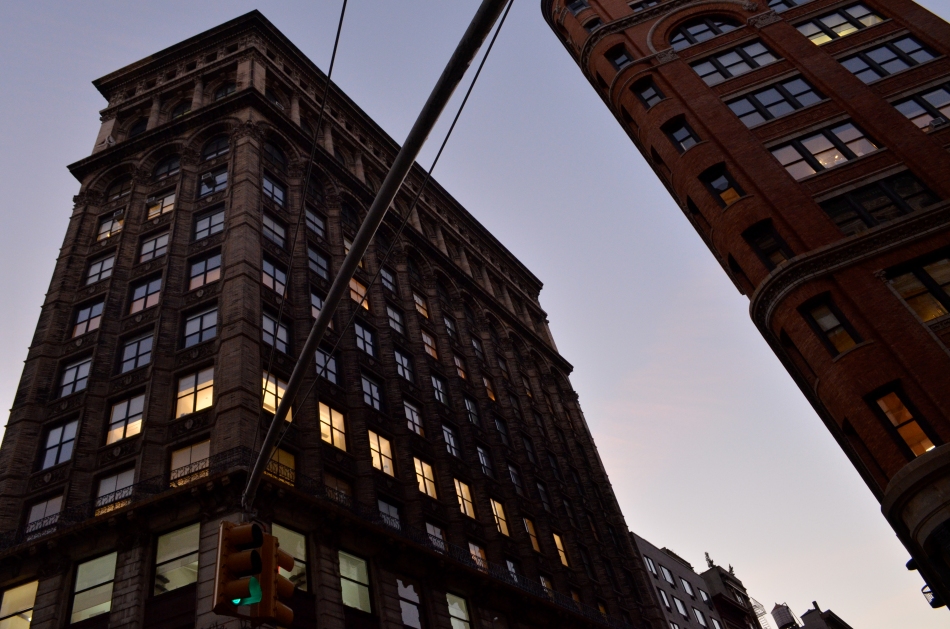 Urban survivors or disposable legacy? Part of the world is always vanishing from view. What portions to visually preserve? And how best to tell these stories? 1/40 sec., f/3.5, ISO 1000, 18mm.

PAUL DESMOND, LEGENDARY SAXOPHONIST for the Dave Brubeck Quartet, was famous for his wry replies to mundane questions from the press. Asked once “so, how are things going?”, he quipped, “Great. We’re playing music like it’s going out of style…..which, of course, it is.”

Beyond the cleverness of the statement, Desmond actually provided a corolary to the ongoing state of photography. It is an art which is never “settled” into any final form, either in its mechanics or its aesthetic. Glass plates give way to roll film, which give way to digital storage, which will give way to..what? Recent trends in the forward edge of shooting hint at, among other things, bold new experiments in the direct exposure of chemically treated paper, minus lenses or shutters, resulting, in effect, in a camera-less camera. So now, what? A method so old that it’s new? So complicated that it’s totally simple? And where in these new crafts lie the art they might enable?

As image makers, we are really running down two parallel rails en route to obsolescence, since the world, as it can presently be seen, is passing away at the same lighting rate as our current means of documenting it. This is a constant for our art. When Eugene Atget recorded the last days of the Paris of the late 19th century, his methods for making the shots was fading out of fashion almost as quickly the dark, twisting streets he recorded. And when his protege, Berenice Abbott, undertook the same “mapping” of New York’s boroughs in the 1930’s (on assignment from various New Deal agencies), she, too was laboring against constantly improving methods for completing the book Changing New York, starting her massive project with a 60-pound view camera, and ending it with a new, lighter Rolleiflex miniature. She was also, understandably, racing against the wrecking ball of progress.

Worse, many places, such as the American southwest (where I live), hold the view that “old” is not “venerable”, but “in the way”….creating, for the shooter, a constant conundrum; what to visually archive, and in what way, and in what order?

The quiet death of Kodachrome, several years ago, proved a challenge for imagists the world over. If you were burning your last roll of this fabulous film forever, what shots would make your photographic bucket list? And how about expanding this scenario to include not just diehard “filmies”, but everyone? If there were an absolute deadline for imaging, a date beyond which no more pictures could be taken, ever, ever, what new urgency would inform your choices? 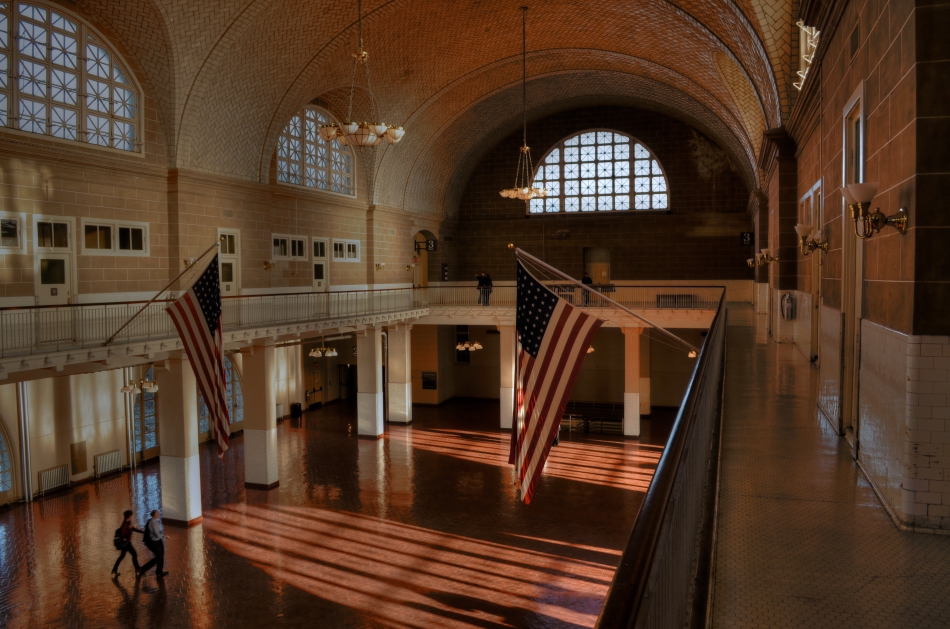 Sites like Ellis Island’s Great Hall have more than their share of caretakers. But how many other visual dramas will escape our viewfinders before they pass from the earth?  1/25 sec., f/6.3, ISO 100, 18mm.

It’s almost that dire already. Time hurtles forward and lays waste to everything in its path, including ourselves. Today, now, we are watching it erase neighborhoods, cities, forests, the shapes of nations, even the names of places. Even if we use our skills largely for cataloguing the general effect of these changes, we are nonetheless under the gun to fill our days with the grabbing of these fleeting glances. Even while we perpetually change how we capture, we must capture as much as we can, by any means available.

There is no mission statement stronger than the three words always be shooting. Because we are doing more than saving memories; we are, in fact, bearing witness. Whatever the subject, wherever we want to start chronicling the word around us, we need to be taking pictures.