PULL DOWN THE NOISE

PHOTOGRAPHY OFTEN SPEAKS LOUDER IN A SOFTER VOICE. Think about it. If you accept the idea of visual information as a sort of “sound”, then it’s easy to see why some images don’t make a direct connection with viewers. They are busy, overloaded with information, or, in this metaphor, noisy, loud. Cachophonous. Chaotic. Too many “sounds” competing for attention. In a visual image, “noise” can be anything that keeps anyone from hearing the “voice” of your image. To be seen more clearly, pictures need to go soft, in order to be heard louder.

That usually means simplifying the image. Shaping its tone, its framing, its central message. In photography, we all make the mistake of trying to show everything, and, in the process, creating an overdose of data that sends the viewer’s eye wandering all around the picture, trying to find something, anything, to focus on. We present a three-ring circus where just one would be more than adequate. 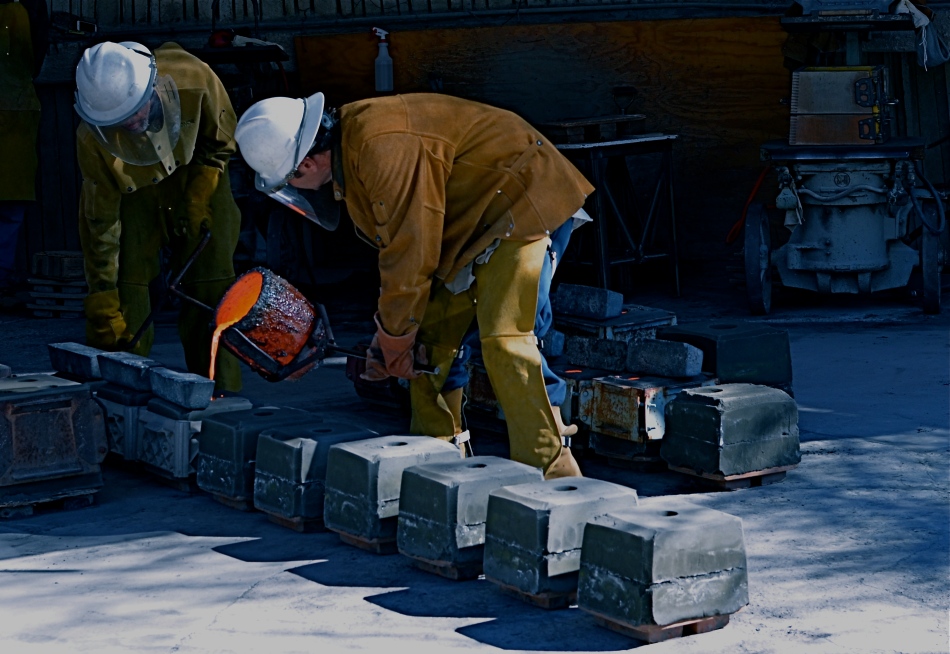 A “perfect” exposure would have inhibited the drama inherent in this situation. So we made it more imperfect.

On a recent trip to an art studio in Paradise Valley, Arizona, I was lucky enough to be present when artisans were pouring molten bronze into decorative molds for all us green “touristas”. Capturing the scene “as is” was easy, as I had plenty of time to calculate exposure and lighting. As a result, I got a lot of “acceptable” pictures good enough for the average postcard, but their storytelling quality was only so-so, since they were almost too full of color, detail and people/props. In the moment, I merely recorded a group of people in a crowded shop doing a job. The tonal balance was “perfect” according to the how-to books, as if I had shot the images on full auto. In fact, though, I had shot on manual, as I always do, so where was my imprint or influence on the subject? The pictures weren’t done.

Back home, when my brain had time to go into editor mode, I realized that the glowing cup of metal was the only essential element in the pictures, and that muting the colors, darkening the detail and removing extra visual clutter was the only way that the center of the shot could really shine.

With that in mind, I deepened the shadowy areas, removed several extraneous onlookers and amped up the orange in the cup. Seems absurdly simple, but as a result, the image was now a unique event instead of a generic “men at work” photo. The picture had to use a softer voice to speak louder.

Great picture? Not yet.

Best thing about the creative process, unlike banking, building or brain surgery,  is the luxury of do-overs. And doing over the do-overs, over.