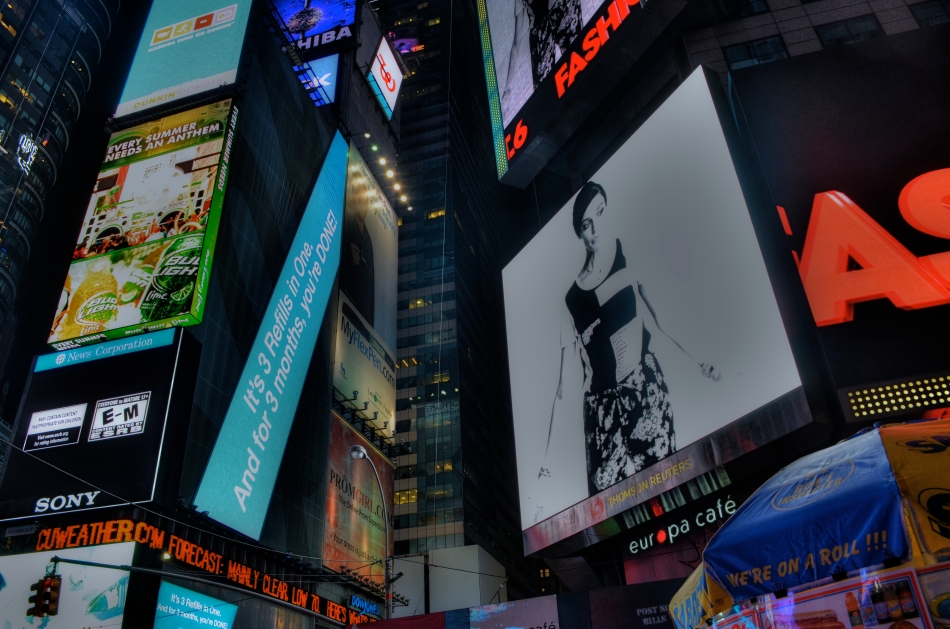 GOING BACK OVER HUGE FOLDERS OF IMAGES LONG AFTER THE FACT OF THEIR CREATION, a kind of aesthetic amnesia comes over me as to what the original intent of some of the pictures were. Who is this person?  And why can’t I remember being him when this thing was shot?

A bit of background:

As much time as I have spent in New York’s Time Square, I should know better than to even raise my camera to my face, given that this particular locale has produced, for me, more hot messes and failed missions than any other subject I’ve ever aimed at. The place is a mirage, a trap for shooters: a visual overload, obscenely loud and demanding of attention, but spectacularly devoid of content. There is no “message” afoot in this vast glowing urban canyon except step right up we got what you need right here great seats at half price a whole dinner for just ten bucks hey watch who yer shovin’.

Hey, if you’re looking for meaning, stay home and read your Bible.

And yet, every time I’m there, I still try to take “THE shot”, vainly sticking to the idea that there is even one in there, and that all I have to do is find it. If I only had a helicopter, if I shot it at this end of the street, if I just find the great unifying theme, the truth will come forth….

Anyway, in reviewing the above image, one I originally consigned to the dustbin, I’m once again that aesthetic amnesiac. I don’t recognize the person who took it. It doesn’t look like anything I’d try, since it’s just an arrangement of angles, colors, and dark spaces. In other words, an attempt to see a design in part of the scene, rather than an overall tapestry of the entire phenom. Sort of splintering the square. It’s the casting of the city as a personality, I guess, that appeals to me, like the Los Angeles of Blade Runner or the neon neo-Asia of Joel Schumacher’s Gotham City.

I seriously don’t remember what I was going for here, and maybe, with a subject like this, that’s the only way to go. Stop calculating, stop plotting, just react, and treat Times Square as the amusement park ride it is. Going for “THE shot” has always given me dozens of , eh, sorta okay pix, but this approach appeals to me a little bit. I am not totally unpleased with it, or as a more eloquent writer might put it, it doesn’t suck.

And given my track record in Times Square, that’s slightly better than a break-even.

Now if I could only remember who took the damned thing…..