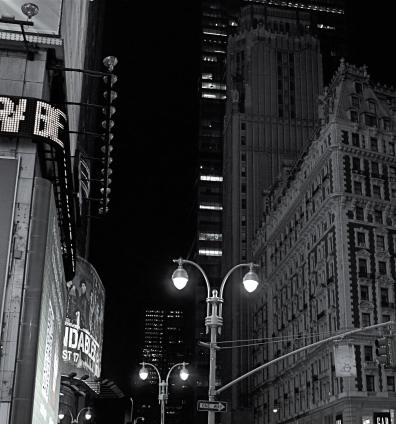 Yeah, it’s “Broadway”, but a little further from the solar flare of its neon overkill.

WE HAVE PROVEN OURSELVES TO BE A SPECIES THAT HATES TO BE SENT TO BED. Night life being a kind of “second shift” in most of the modern world, we really never lock up our cities for the evening, and that has changed how those cities exist for photographers.

Here’s both the good and bad news: there is plenty of light available after dark in most towns. Good if you want the special mix of neon, tube glow and LED burn that sculpts the contours of most towns post-sundown. Bad if you really want to see cities as special entities defined by shadow, as places where dark is a subtle but aesthetically interesting design element. In many mega-cities, we have really banished the dark, going beyond essential illumination to a bleachingly bright blast of light which renders everything, big and small, in the same insane mutation of color and tone. Again, this is both good and bad, depending on what kind of image you want.

Midtown Manhattan, downtown Atlanta, and anyplace Tokyo are examples of cities that are now a universe away from the partial night available in them just a generation ago. A sense of  architectural space beyond the brightest areas of light can only be sensed if you shoot deep and high, framing beyond the most trafficked structures. Sometimes there is a sense of “light decay”, of subtler illumination just a block away or a few stories higher than what’s seen at the busiest intersections. Making images where you can watch the light actually fade and recede adds a little dimension to what would otherwise be a fairly flat feel that overlit streets can generate.

Photography is often a matter of harnessing or collecting extra light when it’s scarce. Turns out that having too much of it is a creative problem in the opposite direction.

This entry was posted on July 18, 2014 by Michael Perkins. It was filed under Available Light, Cities, Composition, Conception, Exposure, Neighborhoods and was tagged with cities, Darkness, exposure, light, Neon, Shadow.