I’VE POSTED SEVERAL PIECES HERE ON “LIGHT-PAINTING”, or the practice of manually applying light to selective areas of objects during long exposures in the dark. The ability to “paint” additional colors, highlights and shadows “onto” even the most mundane materials can transform the whole light-to-dark ratio of the familiar and render it in new, if unpredictable ways. It’s kind of random and a lot of hands-on fun.

Some of the greatest transformations of ordinary objects ever seen in photography were obtained by Edward Steichen, arguably the greatest shooter in any style over the entire 20th century. Working for advertising agency J.Walter Thompson in the 1930’s, Steichen managed to romanticize everything from perfume bottles to kitchen matches to cutlery by arranging visually original ballets not only of these everyday items, but, through multiple source lighting, creating geometrically intricate patterns of shadows. His success in morphing the most common elements of our lives into fascinating abstractions remains the final word on this kind of lighting, and it’s fun to use light painting to pay tribute to it. 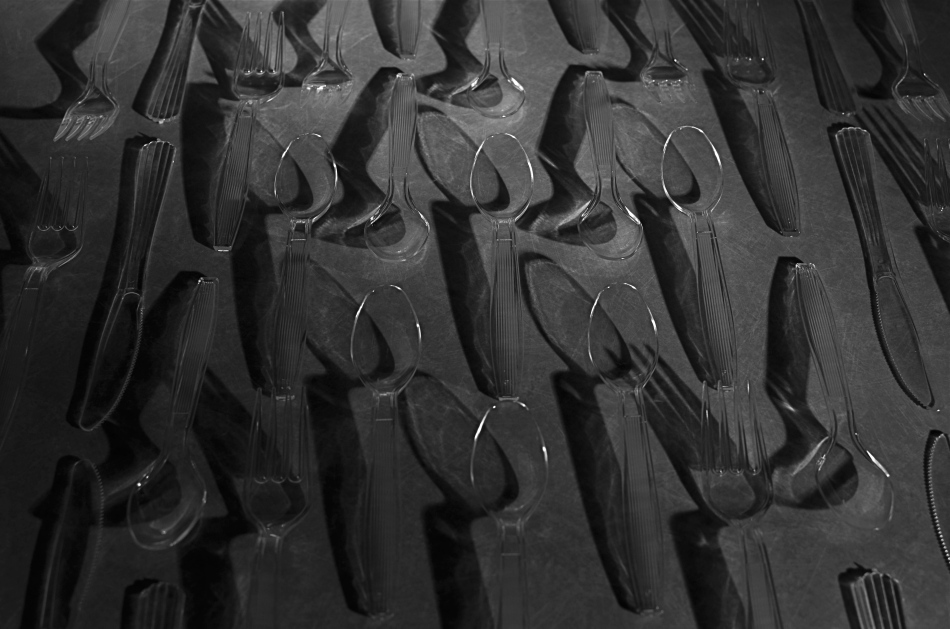 For my own tabletop arrangement of spoons, knives and forks, seen here, I am using clear plastic cutlery instead of silver (fashions change, alas), but that actually allows any light I paint into the scene to make the utensils fairly glow with clear definition. You can’t really paint onto or across the items, since they will pick up too much hot glare after even a few seconds, but you can light from the edge of the table underneath them, giving them plenty of shadow-casting power without whiting out. I took over 25 frames of this arrangement from various angles, since light painting is all about the randomness of effect achieved with just a few inches’ deviation in approach, and, as with all photography, the more editing choices at the end, the better.

The whole thing is really just an exercise in forced re-imagining, in making yourself consider the objects as visually new. Think of it as a puff of fresh air blowing the cobwebs out of your perception of what you “know”. Emulating even a small part of Steichen’s vast output is like me flapping my wings and trying to become a bald eagle, so let’s call it a tribute.

Or envy embodied in action.

This entry was posted on May 8, 2014 by Michael Perkins. It was filed under 35mm, Abstract, Art Deco, Black & White, Composition, Experimental, Exposure, Light Painting and was tagged with Composition, Light Painting, Shadows, Side-Lighting, time-exposure.