A TALE OF TWO KINGS 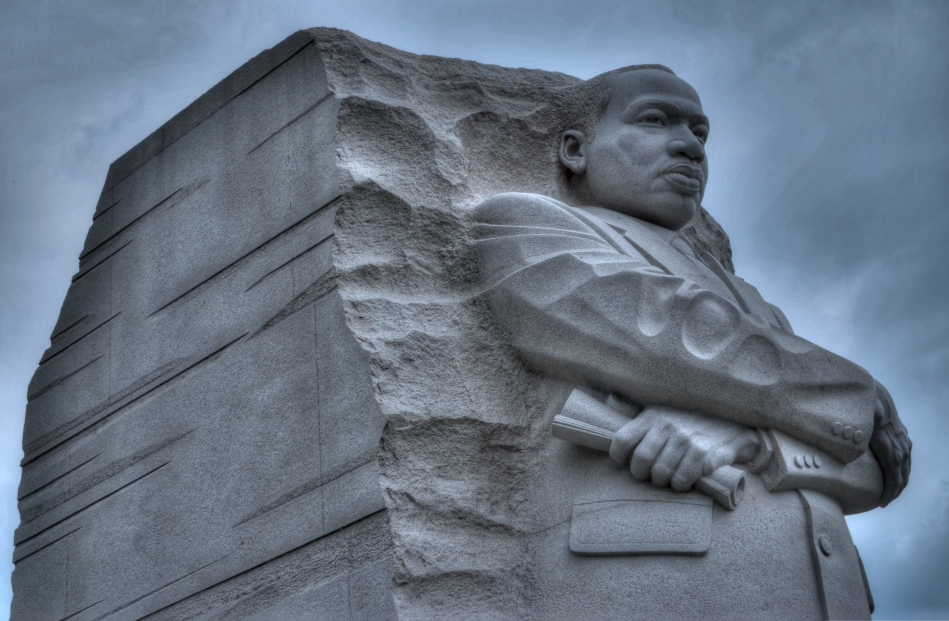 A determined Martin Luther King, Jr. stares forward into the future at the newly dedicated MLK Memorial on Washington’s National Mall. Fusion of three exposures, all with an aperture of f/5.6, all ISO 100, all 48mm. The shutter speeds, due to the high tones in the white statue, are 1/200, 1/320, and 1/500 sec.

DEATH PERMANENTLY RENDERS REAL HUMAN BEINGS INTO ABSTRACTIONS. With every photo, formerly every painting, drawing, or statue of a renowned person, some select elements of an actual face are rearranged into an approximation, a rendering of that person. Not the entire man or woman, but an effect, a simulation. The old chestnut that a certain image doesn’t do somebody “justice”, or the mourner’s statement that the body in the casket doesn’t “look like” Uncle Fred are examples of this strange phenomenon.

Nothing amplifies that abstraction like having your image “officially” interpreted or commemorated after death, and, in the case of the very public Dr. Martin Luther King Jr., Washington’s National Mall offers two decidedly contrasting ways of “seeing” the civil rights pioneer. One is more or less a tourist destination, while the other is muted, nearly invisible amongst the splendors of the U.S. Capitol. Both offer a distinct point of view, and both are, in a way, incomplete without the other.

The official MLK memorial, opened in 2011 as one of the newest additions to the Mall, stands at the edge of the Tidal Basin, directly across a brief expanse of water from the Jefferson Memorial. Its main feature shows a determined, visionary King, a titanic figure seeming to sprout from a huge slab of solid stone, as if, in the words of the monument, “detaching a stone of hope from a mountain of despair”. Arms folded, eyes fixed on a point some distance hence, he is calm, confident, and resolute. This gleaming white sculpture’s full details can best be captured with several bracketed exposures (fast shutter speeds) blended to highlight the grain and texture of the stone, but such a process abstract’s King even further into something out of history, majestic but idealized, removed.

The contrast could not be greater between this view and the bronze bust of King installed in 1988 in the rotunda of the Capitol building. This King is worried, subdued, straining under the weight of history, burdened by destiny. The bust gains some additional spiritual context when framed against its near neighbor, Robert Weir’s painting The Embarkation Of The Pilgrims, which shows the weary wayfarers of the Mayflower, bound for America, on bended knee, praying for freedom, for justice. Used as background to the bust, they resemble a kind of support group, a congregation eager to be led. Context mine? Certainly, but you shoot what you see. Inside the capitol, light from the dome’s lofty skylights falls off sharply as it reaches the floor, so underexposure is pretty much a given unless you jack up your ISO. Colors will run rich, and some post-lightening is needed. However, the dark palette of tones seems to fit this somber King, just as the triumphant glow of the MLK Memorial’s King seems suited to its particular setting.

Death and fame are twin transfigurations, and what comes through in any single image is more highly subjective than any photo taking of a living person.

But that’s where the magic comes in, and where mere recording can aspire to become something else.

Mr. Lincoln’s vigil continues. See below for details on the making of this image.

MANY OF THOSE WHO TRAVEL TO WASHINGTON, D.C.’s VARIOUS MONUMENTS each year generally strike me as visitors, while those who throng to the memorial honoring Abraham Lincoln seem more like pilgrims. Scanning the faces of the children and adults who ascend the slow steps to the simple rectangular chamber that contains Daniel Chester French‘s statue of the 16th president, I see that this part of the trip is somehow more important to many, more fraught with a sense of moment, than the other places one may have occasion to view along the National Mall. This is, of course, simply my subjective opinion. However, it seems that this ought to be true, that, even more than Jefferson, Washington or any other single person attendant to the creation of the republic, Lincoln, and the extraordinary nature of his service, should require an extra few seconds of silent awe, and, if you’re a person of faith, maybe a prayer.

This week, one hundred and fifty years ago, the gruesome and horrific savagery of the Civil War filled three whole days with blood, blunder, sacrifice, tragedy, and finally, a glimmer of hope, as the battle of Gettysburg incised a scar across every heart in America. Lincoln’s remarks at the subsequent dedication of the battlefield placed him in the position of official pallbearer for all our sorrows, truly our Commander-In-Grief. Perhaps it’s our awareness of the weight, the loneliness, the dark desolation of that role that makes visitors to the Lincoln Memorial a little more humble, a little quieter and deeper of spirit. Moreover, for photographers, you want more of that statue than a quick snap of visiting school children. You want to get something as right as you can. You want to capture that quiet, that isolation, Lincoln’s ability to act as a national blotter of sadness. And then there is the quiet resolve, the emergence from grief, the way he led us up out of the grave and toward the re-purposing of America.

The statue is a simple object, and making something more eloquent than it is by itself is daunting.

The interior of the monument is actually lit better at night than in the daytime, when there is a sharp fall-off of light from the statue to the pillars and colored glass skylights to its right and left. You can crank up the ISO to retrieve additional detail in these darker areas, but you risk the addition of grainy noise. In turn, you can smooth out the noise later, but, in so doing, you’ll also smear away the beautiful grain in the statue itself.

In my own case, I decided to take three bracketed exposures, all f/5.6, , nice and wide at 20mm, low noise at ISO 100, with shutter speeds of 1/50, 1/100,  and 1/200. In blending the three later in Photomatix’ Detail Enhancement mode, I found that the 1/200 exposure had too little information in it, so a composite of the three shots would have rendered the darkest areas as a kind of black mayonnaise, so I did the blend with only two exposures. Stone being the main materials in the subject, I could jack up the HDR intensity fairly high to accentuate textures, and, for a more uniform look across the frame, I gently nudged the color temperature toward the brown/amber end, although the statue itself is typically a gleaming white. The overall look is somewhat more subdued than “reality”, but a little warmer and quieter.

Abraham Lincoln was charged with maintaining a grim and faithful vigil at America’s bedside, in a way that no president before or since has had to do. Given events of the time, it was in no way certain that the patient would pull through. That we are here to celebrate his victory is a modern miracle, and the space his spirit occupies at the Lincoln Memorial is something photographers hunger to snatch away for their own.

What we try to capture is as elusive as a shadow, but we need to own something of it. The commander-in-grief’s legacy demands it.

IN THE LINE OF FIRE 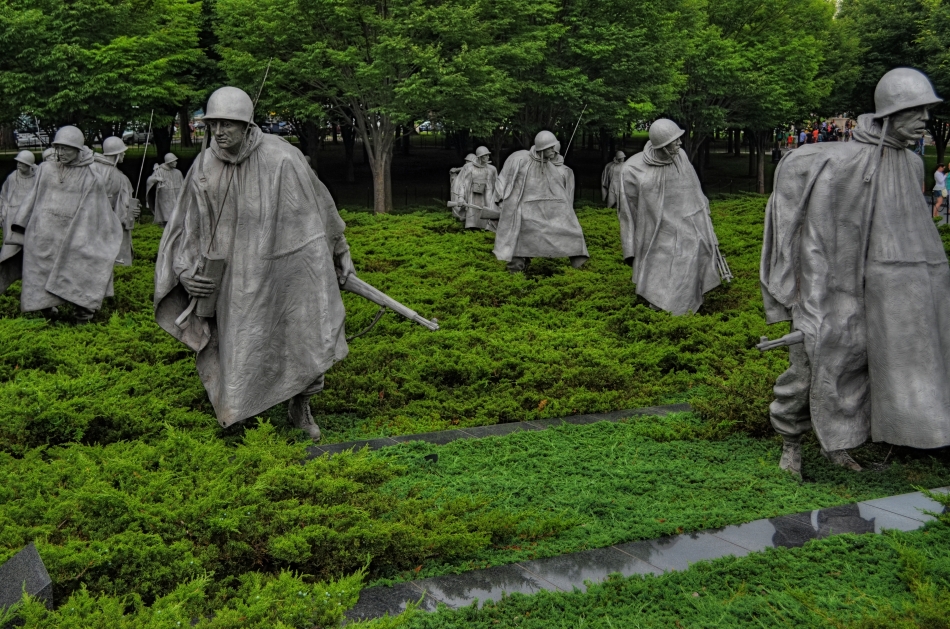 THERE IS NO GREATER ART THAN THAT WHICH DEMANDS THAT THE VIEWER BECOME A PARTICIPANT, an active co-creator of a bond between creator and user. That is the ineffable power that pervades all great art; the ability to draw you into a world not your own, a world which, in an instant, becomes your own. This elusive quality moves art from mere depiction to a kind of partnership arrangement. It’s so uncommon, so rare, that, when we see an instance of it, the very nature of the effect is radiant, unforgettable.

There are many attempts along Washington, D.C.‘s National Mall to name the nameless, to five utterance to the wordless qualities that define greatness, vision, loss, courage, passion, and pain. America‘s noisy, erratic journey through its young life have left trails of triumph and tragedy, paths that artists have illuminated with the various memorials and monuments which ring the mall from east to west. Some elevate presidents to the level of demigods; some mark the passage of noble laws; others, like the Vietnam War memorial, evoke deep feeling with a reverent stillness, and my favorite, the more recent Korean War Memorial, captures the quiet terror of setting out upon the grim errand of battle in a way that is eerie, and yet elegant. 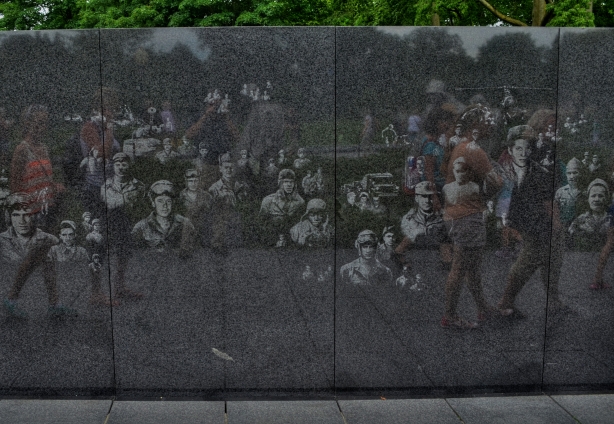 Visitors to the Korean War Memorial pass a wall etched with candid photos of G.I.s who served in the conflict.

There are two major elements to the memorial, dedicated in 1995 just southeast of the Lincoln Memorial. The first is reminiscent of the wall of names that comprise the solemn Vietnam memorial, but is slightly different in that it is a wall of faces, the effigies of nameless veterans of the conflict, scanned from candid photographs and etched into a stone slab that lines one side of the site. The other, and far more haunting feature is that of a silent patrol of soldiers, its members drawn from each branch of service in the Korean conflict, setting out in a cautious recon march across an open field. The statuary figures are impressive, averaging about seven feet in height. All of the soldiers cast their nervous gaze about the area as they seem to emerge from the relative safety of a copse of trees that border the monument site. The men are exhausted, grim. There is no call to duty in their poses, no grand gestures of heroism, no “follow me, boys!” rallying cry. Sculptor Frank Gaylord has created a squad of the Spirits Of Thankless Jobs Past, laden with gear, shrouded in ponchos, their steps weary and woeful. Get close enough to them and you can almost fall into step among them. Unlike the church-like quiet of the Vietnam memorial or the majestic marble of the WWII memorial, the Korean shows real men who have been sent to an unhappy, uncertain task, then consigned to the shadows, in what history has since labeled “the forgotten war.”

No majestic slogans mark the monument; only the cautionary sentence “Freedom Is Not Free” serves to warn the visitor that every act undertaken by politicians and kings has a real cost for real men. That cost is also recorded on the monument, with the dead, wounded, captured and missing totaling 172,847 Americans, not to mention the losses of the other twenty-two United Nations members whose soldiers comprised the total war effort.

To stand at many of the National Mall’s war memorials is to deal in abstractions…..patriotism, truth, sacrifice…noble words, noble ideals. To stand at the Korean War Memorial is to feel the blood and bone of war, its terror and tension, its risk and reality. It is the greatest kind of public art, because the public are destined, always, to become a vital part of it.

In the line of fire.