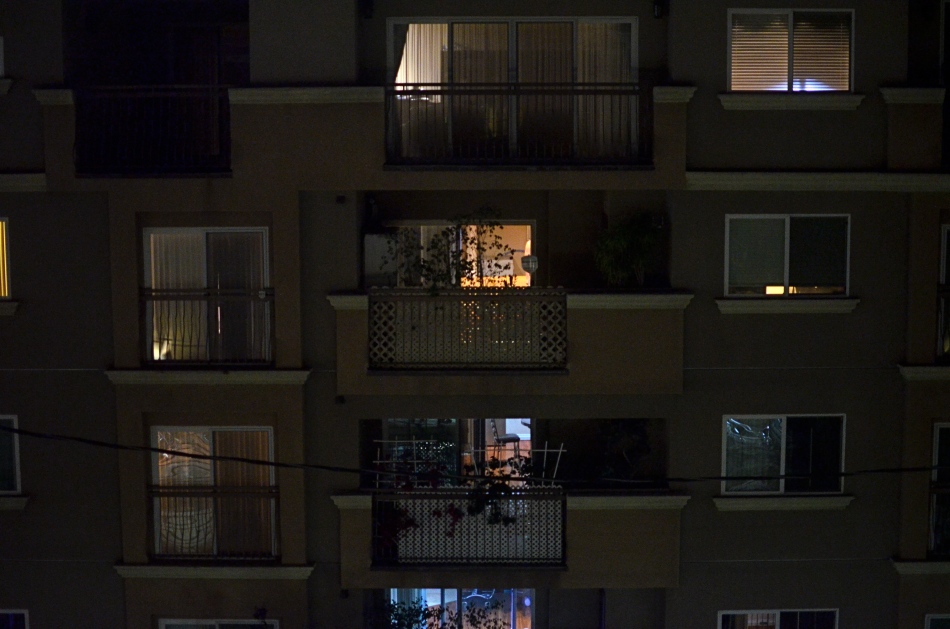 ALFRED HITCHCOCK’S CLASSIC REAR WINDOW IS THE ULTIMATE GUILTY PLEASURE, and not just because the Master of Suspense is at the peak of his edge-of-your-seat powers in the telling of its thrilling murder story. No, the massive, full-sized set of James Stewart’s Manhattan neighborhood, with all its apartment-dwellers’ secrets open to the most casual snoop, is the creepy, giddy candy at the center of this cinematic confection. In making it temporarily okay to be, in effect, peeping toms, Hitchcock is making us complicit in his hero’s unsavory curiosity. All these dramas. All these secrets that we have no right in knowing. And, of course, we can’t look away.

Photographing the intersection of living spaces in city settings is far often more subtle than Hitch’s feat of shaving the back wall off an entire community, and that makes for a lot more mystery, most of us beyond solution. Look too little, and a slab of brick is more like a beehive than a collection of stories. Look too deeply, and the truths you unearth can feel stolen, like an invasion done purely for prurient entertainment. What’s most interesting is to imply much but reveal little, and hitting that balance is tough.

I recently killed off the last fifteen minutes of a generally unproductive night of street shooting by gazing out the window of my nondescript hotel at an equally nondescript apartment building across the way. The last vestiges of dusk offered scant details on the outside wall, and the warm yellow hum of electrical light had already begun to flicker on in the various cubicles. I thought of Rear Window and how you could look at the fully visible doings of people, yet still know virtually nothing of their lives. Here the lighting was random, undefined, with little real information on the life throbbing within the individual spaces….the dead opposite of Hitchcock’s deliberate staging.

I couldn’t see a face, a hand, an activity. All I had was the mere suggestion of human presence. What were they reading, watching, wishing, enduring, enjoying, hating? I couldn’t know and I couldn’t show it, but I could show the mystery itself. I could share, if you will, the sensation of not being able to know. And so I made a photograph of that lack of information.

Some photographs are about things, obvious things that you’re able to freeze in time. Other images are about the idea of something, a kind of unsatisfied anticipation. Both kinds of pictures have their own narrative code, and learning how to manage these special languages is great practice for the idea, and the mind back of it.

FEW OF US CAN CHANNEL FRANK SINATRA’S VOCAL ACUMEN, but we can all relate to the urban movies that he started running in the projection rooms of our minds. For most of his career, The Voice was a very visual actor, shaping sound into virtual landscapes of lonely towns, broken-hearted guys wandering the waterfront, and blue mornings where the sun rises on you and ….nobody else. Frank could smile, swagger, strut and swing, for sure, but he was the original king of desolate all-nighters, our tour guide to the dark center of the soul.

He was also, not coincidentally, a pretty good amateur photographer.

I tend to see restaurants, bars, and city streets in general through the filter of Sinatra’s urban myths. Tables covered with upturned chairs. The bartender giving the counter one more weary wipedown. Dim neon staining rain-soaked brick streets. Curling blue-grey wisps of cigarette smoke. And shadows that cover the forgotten in inky cloaks of protection. Give me eight bars of “One For My Baby” and I’m searching for at least one bar that looks like the last act in a Mamet play.

It becomes a kind of ongoing assignment for photographers. Find the place that strikes the mood. Show “lonely”. Depict “Over”. Do a portrait called “Broken-hearted Loser.” There are a million variations, and yet we all recognize a slice of every one. Like Frank, we’ve all been asked by the host if he can call us a cab. Like Frank, we’ve all wondered, sure, pal, but where do I go now?

It’s not often a pretty picture. But, with luck, it’s sometimes a pretty good picture.

A KISS ON VETERAN’S DAY

A PICTURE, WHEN IT TRULY COMMUNICATES, isn’t worth a thousand words. The comforting cliché notwithstanding, a great picture goes beyond words, making its emotional and intellectual connection at a speed that no poet can compete with. The world’s most enduring images carry messages on a visceral network that operates outside the spoken or written word. It’s not better, but it most assuredly is unique.

Most Veteran’s Days are occasions of solemnity, and no amount of reverence or respect can begin to counterbalance the astonishing sacrifice that fewer and fewer of us make for more and more of us. As Lincoln said at Gettysburg, there’s a limit to what our words, even our most loving, well-intended words, can do to consecrate that sacrifice further.

But images can help, and have acted as a kind of mental shorthand since the first shutter click. And along with sad remembrance should come pictures of joy, of victory, of survival.

Of a sailor and a nurse.

Alfred Eisenstaedt, the legendary photojournalist best known for his decades at Life magazine, did, on V-J day in Times Square in 1945, what millions of scribes, wits both sharp and dull, couldn’t do. He produced a single photograph which captured the complete impact of an experience shared by millions, distilled down to one kiss. The subjects were strangers to him, and to this day, their faces largely remain a mystery to the world. “Eisie”, as his friends called him, recalled the moment:

In Times Square on V.J. Day I saw a sailor running along the street grabbing any and every girl in sight. Whether she was a grandmother, stout, thin, old, it didn’t make a difference. I was running ahead of him with my Leica, looking back over my shoulder, but none of the pictures that were possible pleased me. Then suddenly, in a flash, I saw something white being grabbed. I turned around and clicked the moment the sailor kissed the nurse. If she had been dressed in a dark dress I would never have taken the picture. If the sailor had worn a white uniform, the same. I took exactly four pictures. It was done within a few seconds.

Those few seconds have been frozen in time as one of the world’s most treasured memories, the streamlined depiction of all the pent-up emotions of war: all the longing, all the sacrifice, all the relief, all the giddy delight in just being young and alive. A happiness in having come through the storm. Eisie’s photo is more than just an instant of lucky reporting: it’s a toast, to life itself. That’s what all the fighting was about anyway, really. That’s what all of those men and women in uniform gave us, and still give us. And, for photographers the world over, it is also an enduring reminder from a master: