IN A PERFECT WORLD, all our photographs would have their permanent address at the intersection of Flawless Technique Street and Great Message Boulevard. And while some do, magically, make it to this mystical crossroads, many others lose the paper the directions were scribbled on and wind up down some back alley.

Powerful narratives can arrive in perfect packages, sure. But not often and not with any predictability. Often we settle for one half of the ideal or the other. That “going halfies” choice determines what we regard as most important in our favorite images.

I would love to be able to achieve technical perfection every time I’m up to bat, but I’m not religious about raw precision….at least not the way I am about emotional resonance. Every one of you has a pile of pictures which are optically flawless and another pile of pictures that speak to your best intentions. Given an either/or judgement on which of these are your “keepers”, why wouldn’t you always, always choose the images that, regardless of various “flaws”, conveyed your mind and heart? 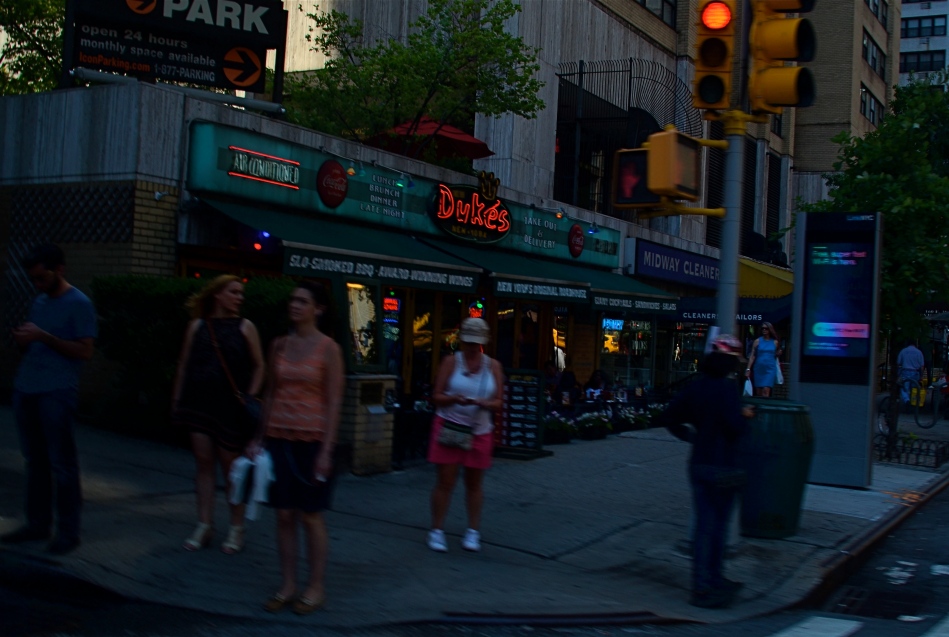 Light, focus, aperture, even composition are tools, not ends unto themselves, and even the best photographers drop one or another of these techno-balls in some of their best work. But should we seriously disqualify an image merely on technical points? If the answer is yes, then half of the works that we collectively value as great must be stricken from the public record, and photography is merely a recording process, like the operation of a seismograph or any other instrument where precision trumps every other consideration. But if the answer is no, then a picture that fails one or more technical tests can stil be considered valid, so long as it is emotionally true.

I struggle with these choices whenever I produce a shot that has things “wrong” with it, but which is also an authentic register of where my mind was at the time it was snapped. Photos like the one seen here would fail many a judge’s test, depending on who’s doing the judging. It’s too dark. The shutter speed is way too slow, inviting blur. Some of the shadows swallow detail that might just be important. And yet I love this building, these people, this moment. In my defense, I had to decide in an instant whether to even attempt the picture, taken, as it was, from the back seat of an Uber lurching unevenly through the streets of Manhattan. Shooting on full manual, I had to anticipate fast changes in available light, the length of traffic signals, the process of shooting through glass with a filtered lens, and the occasional offensive/defensive maneuvers of the driver. In raw scoring, I just didn’t manage to master all of these variables in a technically perfect manner. And yet..

There has been a lot of talk lately about not letting the Perfect be the enemy of the Good, a phrase which says more about photography in ten words than I’ve said in this entire page. Rule one for shooters: don’t let the flawless be master over the real.

ONE OF THE RITES OF PASSAGE FOR SCHOOL KIDS IN COLUMBUS, OHIO IN THE 1960’s was a field trip to the Center of Science and Industry, or COSI, one of the nation’s first interactive tech museums, mounted before either the terms “interactive” or “hands-on” were common parlance. In those JFK-flavored days of early space exploration and Jetson-gee-whiz futurism, flying cars and picture phones seemed our inevitable legacy, and the Center’s exhibits often veered closer to the World’s Fair than the science fair, its dazzling displays often trumping pure enlightenment. A generation later, the sizzle lingers in the mind a little better than the steak. Something to work on.

Science was presented as something of a magic trick then, a sure and certain answer to all human needs and desires. But to my tween-sized mind, it also retained an air of mystery, something wondrously alien to my daily experience. Few of COSI’s exhibits from the time created more of a sense of wonder in me than an illuminated timeline of fetal gestation, with each crucial stage between embryo and newborn illustrated by a separately preserved specimen of a transitional human that never made it to the delivery room. As fascinating as the display was, it was also a little creepy, somewhat like, if you will, viewing pre-mummies from a colony of visitors from the future.

In a recent visit to the new COSI, now re-located to a larger, brighter HQ across from Columbus’ downtown riverfront, I was both amused and amazed to see that the timeline had been retained in nearly the same way I remembered it from 1964. Having survived to the era of iPhones and DNA mapping, its dim, the strange, amber-glow profiles still had a hypnotic effect on me, housed as they were in a dark, shadowy sector of the museum, sealed within a showcase that distorted the faces of passersby, even as it shrouded their bodies in mystery. For the shot you see here, I liked the strange juxtaposition of the exhibit’s clinical coldness with the form of a young visitor, casually viewing the timeline as if it were no more notable than a collection of butterflies. I shut the exposure down so that the case provided the only light, opened the lens as far as I dared for the right depth of field, and jacked the ISO slightly to compensate for the murky room ambience.

The COSI of the New Frontier years was always a place that could cast science in a distinctly optimistic light. In 2015, I hoped to re-imagine that magic through the insight of an additional fifty years of living. Mood in photography is created as much by what you conceal as by what you reveal, and trying to get that balance right is 90% of the game.

ONE OF THE MOST FREEING PARTS OF PICTURE MAKING IS RELEASING YOURSELF FROM THE RIGIDITY OF REALITY. Wait. What is he babbling about? Don’t photographers specialize in reality?

Well, yeah, the photographers who work at the DMV, the city jail and immigration do. Also the guy in Wal-mart HR who made your first employee badge. Other than that, everyone is pretty much rendering the world the way they see it right this minute, with more revisions or re-thinks coming tomorrow. And beyond.

Color processing, once the sole domain of the “photo finishers” has now been taken back in-house by pretty much everyone, and, even before you snap the shutter, there are fat stacks of options you can exercise to recast the world in your own image.

The practice of bracketing shots has made a bit of a comeback since the advent of High Dynamic Range, or HDR processing. You know the drill: shoot any number of shots of the same subject with varying exposure times, then blend them together. But bracketing has been a “best practice” among shooters for decades, especially in the days of film, where you took a variety of exposures of the same scene so you had coverage, or the increased chance that at least one of the frames was The One. Today, it still makes sense to give yourself a series of color choices by the simple act of taking multiple shots with varying white balances. You can already adjust WB to compensate for the color variances of brilliant sun, incandescent bulbs, tube lights, or shade for a more “natural” look. But using white balance settings counter-intuitively, that is, against “nature”, can give your shots a variety of tonal shifts that can be dramatic in their own right.

In the image above, the normal color balance of the gallery entrance would have rendered the bust off-white and the outer vestibule a light grey. Shooting on a tungsten setting when the prevailing light was incandescent gave the interior room a creamy orange look and amped the vestibule into deep blue, setting the two areas sharply off against each other and creating a kind of “end of day” aspect. I shot this scene with about five different white balances and kept the one I liked. Best of all, a comparison of all my choices could be reviewed in a minute and finished by the time the shutter clicked. Holy instant gratification, Batman.