WHENEVER YOU MAKE A PHOTOGRAPH, you set several things in force at the same time, as if you were generating, in addition to the “sun” or central subject of your image, a rotating solar system of lesser planets, or the other information that hitches a ride along with the main idea of the shot. This is especially true of the memory trove that accompanies our most personal photographs. We think we’re just snapping someone we love: as it turns out, we’re also extending an invitation to their entire surrounding reality as well.

This image of my father in 1964, when he was 35, was rescued from an old Kodachrome slide to accompany a Facebook appreciation of the Old Gunfighter for this year’s Father’s Day. The mission was simple…to summon a few chuckles and tears as he begins his 94th year on the planet. That’s really all I was going for when I resurrected the shot.

But other things, keen, clear, important memories accompany and contextualize him as well, even in a so-called “simple” snapshot. In the Catholic Church these things are called “sacramentals“. They are not sacraments in themselves, but the additional sensations that are forever linked to them: candles: the smell of incense: the kind of noise a wooden pew makes when you first creak into your seat: and so on. In this shot, there are many such sacramentals, many little mental barnacles clinging to the bottom of the photo’s main hull.

First, there are the memories connected to the space itself, which was our backyard at 1752 Marston Road, an address that accounts for twelve years of my young life. The house was wood, painted yellow, which means this picture was taken before it became clad in white aluminum siding, which never felt quite as good, or solid, to my fingers as, well, wood. In a time when people rhapsodize about houses with picket fences, we literally had one, and the section just over Dad’s right shoulder was, in his earliest days as an amateur rose planter, his first trellis. There is the metal awning over the side entrance of our neighbor’s house, which was how my mother entered the place to take morning coffee with the Irish lady who owned it and her adopted Puerto Rican baby boy. And over Dad’s left shoulder is The Tree, an immense maple that belonged to the family four doors down, a supertree too big to climb, so massive that the developers who laid out our tract of homes didn’t even try to yank it out, as they had nearly every other stick of vegetation in the area, a titanic ship’s mast of a tree that could be seen from every vantage point in the neighborhood, like a sign that you were returning to safe harbor.

And with this list I am just getting started. And that’s before I consider how strong, how young, how handsome my father was. I clearly remember being ridden around on those shoulders. He gave me a view that I, in turn, tried to impart to my own children, figuratively if not literally. It was, and remains, quite a ride. The one thing this picture does not reveal is who the person behind the viewfinder of our old Kodak 828 Pony was, although I assume it was my mother, as mere children were not entrusted to operate A Real Camera at that time. But that’s a mystery for another day. In the meantime, I hope you will be spending your Father’s Day smothered in warm echoes. And that when a picture emotionally takes you to church, the sacramentals ring forth as musically as a solemn High Mass.

MORE INK HAS BEEN POURED OUT about Henri Cartier-Bresson’s  notion of “the decisive moment” than perhaps any other chunk of photographic philosophy ever hashed out between honest brokers. HCB’s assertion was, essentially, that there is a single, ideal instant in which a picture of something will be, like an apple, perfect for the plucking. Miss that moment, and all is lost.

While some applaud this theory as holy scripture, others dismiss it with a vulgar reference to bovine by-products. All well and good. Everyone needs to evolve a belief system that drives their personal photographic vision. The important thing is to evolve something.

Personally, while I don’t believe there is only a single moment that will make an image immortal, I also don’t think that just any moment you choose to freeze an event is as good as every other moment. Conditions, timing and decisions matter in the making of a picture, and, when they intersect, the magic happens. 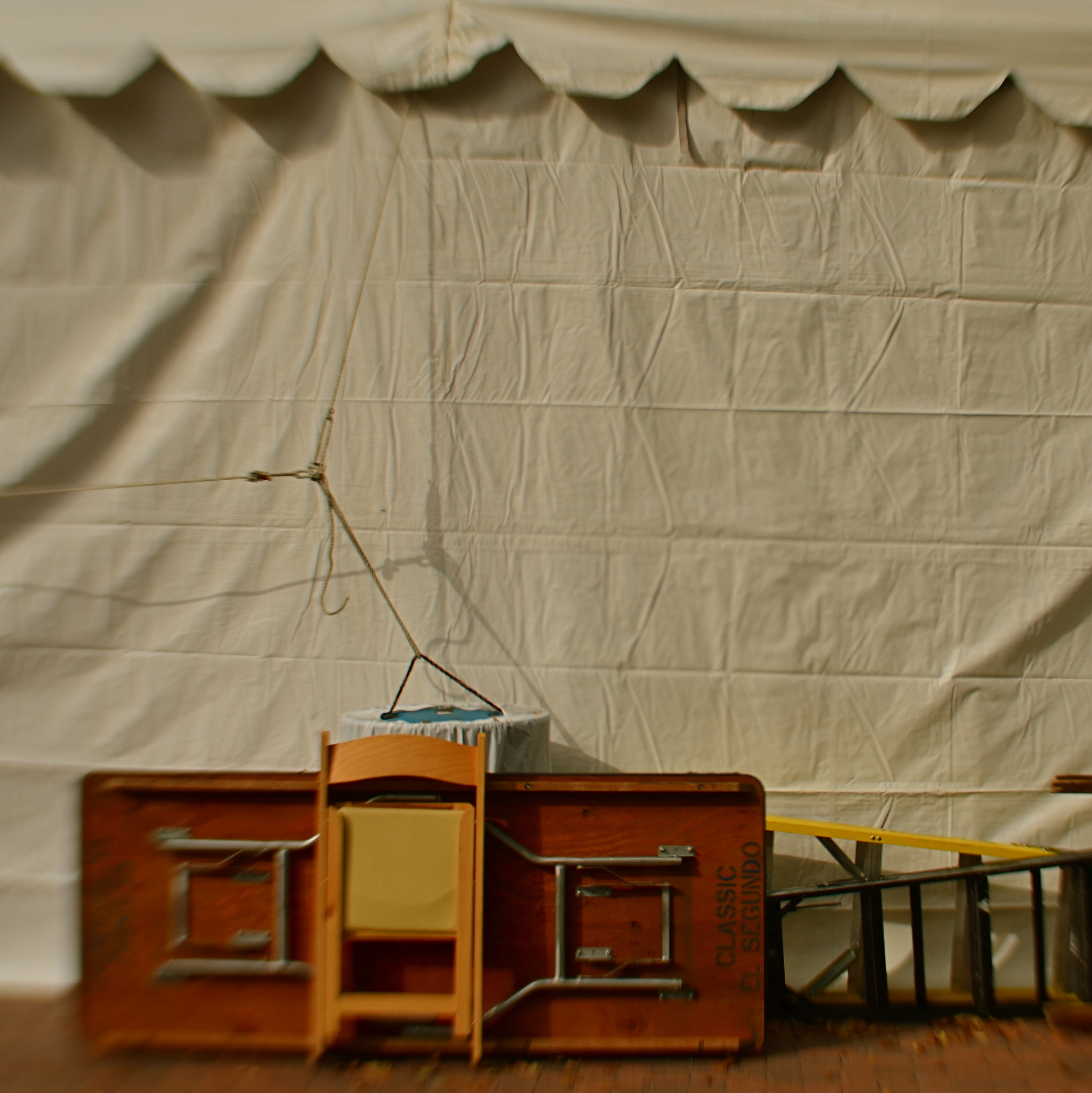 So the number of “decisive moments” for an event, for me, would number about three. Think of them as acts in a play, each act performing a distinct element in a dramatic story. Act One shows things that are about to happen: a nearly blooming blossom: the minutes before street lights are turned on for the evening. Act Two depicts something that is in the process of occurring: candles on a cake being blown out: a pistol shot. And Act Three shows where things have now completed. A concert crowd leaves the theatre: a dog snoozes after a long day of play.

The image seen here can potentially be an example of any of the three acts. Are the backstage props being spread out in anticipation of a show? Is the performance, unseen from this angle, being given right now? Or have the stage hands already begun to strike the tents and gather everything up before moving the players on to the next town? All three interpretations are of specific places in time. And all can be “decisive moments” when the right bond between photographer and viewer is established.

REVENGE OF THE ZOO

PURISTS IN THE ANIMAL PHOTOGRAPHY GAME OFTEN DISPARAGE IMAGES OF BEASTIES SHOT AT ZOOS, citing that they are taken under “controlled conditions”, and therefore somewhat less authentic than those taken while you are hip-deep in ooze, consumed by insects, or scratching any number of unscratchable itches. Editors won’t even consider publishing pics snapped at the local livestock lockup, as if the animals depicted in these photos somehow surrendered their union cards and are crossing a picket line to work as furry scabs .

This is all rubbish of course, part of the “artier-than-thou” virus which afflicts too great a percentage of photo mavens across the medium. As such, it can be dismissed for the prissy claptrap that it is. Strangely, the real truth about photographing animals in a zoo is that the conditions are anything but controlled.

We’ve all been there: negotiating focuses through wire mesh, dealing with a mine field of wildly contrasting light, and, in some dense living environments, just locating the ring-tailed hibiscus or blue-snouted croucher. Coming away with anything can take the patience of Job and his whole orchestra.Then there’s the problem of composing around the most dangerous visual obstacle, a genus known as Infantis Terribilis, or Other People’s Kids. Oh, the horror.Their bared teeth. Their merciless aspect. Their Dipping-Dots-smeared shirts. Brrr…

In short, to consider it “easy” to take pictures of animals in a zoo is to assert that it’s a cinch to get the shrink wrap off a DVD in less than an afternoon….simply not supported by the facts on the ground.

So, no, if you must take your camera to a zoo, shoot your kids instead of trying to coax the kotamundi out of whatever burrow he’s…burrowed into. Better yet, shoot fake animals. Make the tasteless trinkets, overpriced souvies and toys into still lifes. They won’t hide, you can control the lighting, and, thanks to the consistent uniformity of mold injected plastic, they’re all really cute. Hey, better to come home with something you can recognize rather than trying to convince your friends that the bleary, smeary blotch in front of them is really a crown-breasted, Eastern New Jersey echidna.

Any of those Dipping Dots left?