AS MUCH AS WE’D LIKE TO PRE-VISUALIZE OR PLAN OUR IMAGES, the practice of photography is still chiefly a test to see how well we calculate and react in the moment. We all love to map out the various itineraries for our respective photo safaris in advance, but are also keenly aware that everything, literally everything in our blueprint can, and should be, blown to bits the moment magic is afoot.

The image you see here is the product of such a moment.

Officially, on the day this was taken, I was at the Coon Bluff Recreation Site in Arizona’s Tonto National Forest to scope out new birdwatching sites. I was a first-timer on the property, wandering pretty much in whichever direction my friends decided to drift. At some point, a smaller portion of our party decided to trek along the edge of the Salt River, in search of what I had no idea, or design. Half a mile or so later, I was surprised to have our point man remark that he had seen two horses wading and munching along the shore.

Barely five more minutes went by before it became clear that an entire small herd of wild mustangs had decided to cross the river from the far shore toward where we were standing. In what swiftly became something out of my own personal chapter of Lonesome Dove, I scrambled for an open space on the river’s sandy beach and, without thinking very much, cranked out as many frames at as many different exposures as I could. The entire parade got across in the space of barely two minutes. There was no way to plan: this was the frontier equivalent of what urban street shooters call “run and gun”. All in or all out.

But here’s the deal: while the appearance of a clutch of wild horses during a casual stroll certainly exemplifies the There Are No Second Chances rule in a very obvious way, all photographers are operating under that same rule all the time, in every situation. We may not be at risk of missing our own personal Wild West Fantasy, but there are thousands of expressions, variances of light, rapid transitions and other immeasurable changes that we stand to lose in every single shooting scenario. We are always being challenged to detect and isolate such moments-within-moments, with big events or small, and we need to calculate and click before the horses reach the opposite shore.

REVENGE OF THE ZOO

PURISTS IN THE ANIMAL PHOTOGRAPHY GAME OFTEN DISPARAGE IMAGES OF BEASTIES SHOT AT ZOOS, citing that they are taken under “controlled conditions”, and therefore somewhat less authentic than those taken while you are hip-deep in ooze, consumed by insects, or scratching any number of unscratchable itches. Editors won’t even consider publishing pics snapped at the local livestock lockup, as if the animals depicted in these photos somehow surrendered their union cards and are crossing a picket line to work as furry scabs .

This is all rubbish of course, part of the “artier-than-thou” virus which afflicts too great a percentage of photo mavens across the medium. As such, it can be dismissed for the prissy claptrap that it is. Strangely, the real truth about photographing animals in a zoo is that the conditions are anything but controlled.

We’ve all been there: negotiating focuses through wire mesh, dealing with a mine field of wildly contrasting light, and, in some dense living environments, just locating the ring-tailed hibiscus or blue-snouted croucher. Coming away with anything can take the patience of Job and his whole orchestra.Then there’s the problem of composing around the most dangerous visual obstacle, a genus known as Infantis Terribilis, or Other People’s Kids. Oh, the horror.Their bared teeth. Their merciless aspect. Their Dipping-Dots-smeared shirts. Brrr…

In short, to consider it “easy” to take pictures of animals in a zoo is to assert that it’s a cinch to get the shrink wrap off a DVD in less than an afternoon….simply not supported by the facts on the ground. 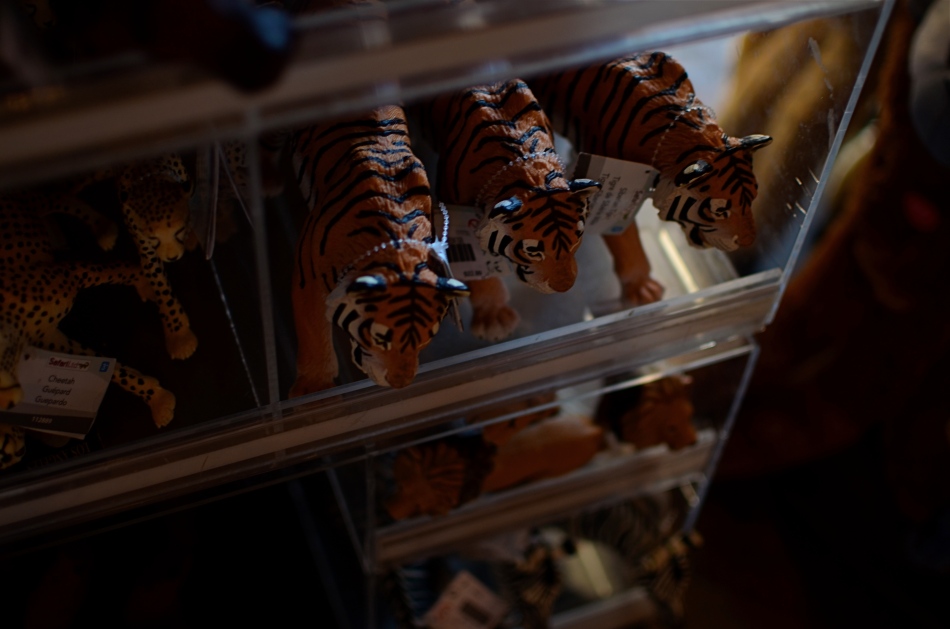 So, no, if you must take your camera to a zoo, shoot your kids instead of trying to coax the kotamundi out of whatever burrow he’s…burrowed into. Better yet, shoot fake animals. Make the tasteless trinkets, overpriced souvies and toys into still lifes. They won’t hide, you can control the lighting, and, thanks to the consistent uniformity of mold injected plastic, they’re all really cute. Hey, better to come home with something you can recognize rather than trying to convince your friends that the bleary, smeary blotch in front of them is really a crown-breasted, Eastern New Jersey echidna.

Any of those Dipping Dots left?