LOVE AT THE SPEED OF A SHUTTER

DICKENS‘ A CHRISTMAS CAROL IS OFTEN REGARDED as a ghost story, and a marvelous and chilling one it certainly is. But because its lessons are couched in the colors and echoes of the most wonderful time of the year, the tale of Scrooge’s regeneration also acts on the heart like a series of photographs. It freezes time and invites us to re-inhabit that which has so fleetingly danced by our life lenses. Instead of weeping for what we’ve lost, we smile over what we’ve lived.

There is a reason that Christmas and photography forged such a natural bond. Both deal in retrieval, the summoning of shadows for Just One More Look. Aided by images, we call dear ones back from the beyond for a final embrace, a warm wince of recognition. Remember how handsome he was? Do you recall the day when she got that dress? Oh, there’s the baby.

No one had to teach the world the value of all those little tintype testimonies when it came to the holidays. Everyone instinctively got the connection between the inexorable march of years and the value of stealing back just a taste of them with the snap of a shutter. Scrooge had his spirits to remind him of the man he had been and the man he still might be. They were his snapshots. His renewed realization of what had been wonderful in his life was his photo album.

Today, still, when someone is privileged to head home for a few days, we wish them well in several ways. Have a safe trip, we say. Give everyone my love, we say.

And then the inevitable tag line.

IN RAY BRADBURY’S WONDERFUL ONE-ACT PLAY, TO THE CHICAGO ABYSS, an old man equipped with a near-photographic memory makes both friends and enemies because he remembers so much of a world vanished in the aftermath of global war. His talent lies not merely in being able to conjure the world of large things….cathedrals, cars, countries, but of the micro-minutia of a life, a realm filled with the colors of cigarette packages, what compressed air sounded like hissing out of a newly opened can of coffee, the names of candy bars. The play reminds us that it is the million little pieces, the uncountable props of daily living, that matter…..especially when they are no more.

Professions and services offer the photographer the chance to preserve entire miniature worlds for the viewer, worlds which are in the constant process of sunsetting, of transitioning from “is” to “was”. Shops where we used to get our watches repaired. Bookstores that are now furniture warehouses. Home where those people we knew, oh, you know their names, used to live. Was it on the corner? Or over there? 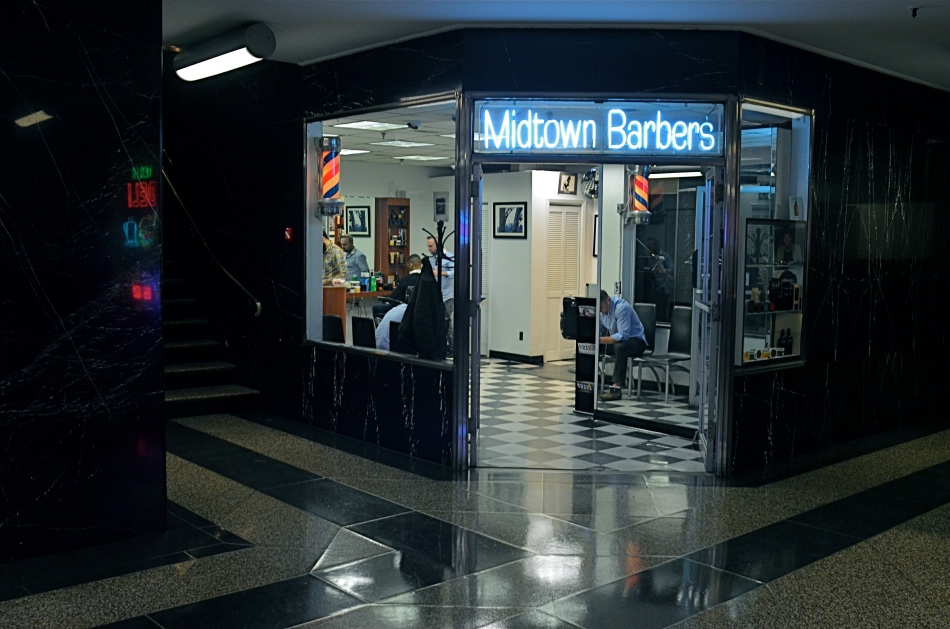 Even when long-familiar things survive in some form, they are not quite as we knew them. Does anyone still get their shoes re-soled? Was there ever a time when “salons” were just “barber shops”? Was it, long ago, some kind of luxury to weigh yourself for a penny in the bus station? Photos of these daily rituals take on even greater import as time re-contexualizes our lives, shuffling our position in the cosmic deck. Decades hence, we almost need visible evidence that we ever lived this way, ever dressed like that.

I love shooting businesses that should not be around, but are, places that should have already been scrubbed from day-to-day experience, but stubbornly linger around the edges. Images taken of these places argue strongly that not all forward motion is progress, that the familiar and the comfortable are also little pieces of our identity. In the words of the old song, there used to be ballpark right here.

WINTER IS A TIME OF MUTED COLORS, DIMINISHED SUNLIGHT and inner struggle. I’ve heard people refer to the leaner, darker months as the feeling of being shut up inside a box, almost like having yourself placed in storage. I would lop one side off of that polygon and say that, to me, it feels more like being locked in a triangle.

As a photographer, I feel as if, in winter, I sustain three distinct emotional “hits” about my work, forming the three sides of the triangle, all three pressing up against, and balancing, each other. These sides can be described as:

Not enough new or compelling ideas coming into my brain. A case of the “drys”.

Too much re-evaluation of all of my images that failed, along with a big fat dose of recrimination.

A near-crippling sadness over the photographic opportunities, many tied to people now departed, that I simply didn’t act upon, and which are now lost to me forever.

The first side of the triangle really isn’t unique to winter-time. I experience

fallow periods throughout the year. They just ache more when amplified by slate-gray skies and dead trees. The second is to be expected, since spending more time indoors means rifling through old boxes of prints and slides, asking myself what the hell I was thinking when I chose this exposure or that subject, and ending the entire process by pitching some of those boxes into the incinerator. A needed exercise, but hardly anyone’s idea of a fun time.

No, it’s the third side of the triangle which is the real killer, since the photos that haunt you the worst are always the ones you didn’t take. Friendships pour additional salt into this particular wound, since, somehow, you never recorded quite enough of the faces which once were the common features of your world, and which time has, one by one, erased.

Your own personal list of pals-not-present grows steadily over the years, and the thought that you could have shot one less sunset to capture just one more portrait of some of them hurts. It’s not as if your emotional souvenirs of them aren’t burned into your mind’s eye. It’s not even that you might have done something magical or singular with their faces beyond another birthday candid. It’s simply that once you could, and now you can’t.

The triangle isn’t all torture. Breaking out of it means taking arms against ghosts, and (as Shakespeare said), by opposing, ending them. You not only have to keep shooting, but keep shooting mindfully. Because when all of this that we call reality finally drains through our fingers, the scraps of it that we leave behind really can matter. Even with triangles, there’s always one more side to the story.

You can convert a color shot through the “old Kodachrome” filter on the AltPhoto app…..

THE HOLIDAY SEASON MAY OFTEN SEEM TO HAVE “OFFICIAL” COLORS, (red, green, etc.) but its unofficial colors reside primarily, and gloriously, in memory. Given how many iterations of photography span most of our lives, our minds tend to twist and tweak colors into highly individualized chromatic channels. Are your most treasured moments in ’50’s Black and White? ’60’s Kodachrome? In the time-tinted magentas of snaps from the 70’s? In blue-green Super 8 Ektachrome or expired Lomo film? Or do you dream in Photoshop?

This is personal stuff, very personal. It seems like we ought to agree universally on the “correct” colors of the season, but, given that our most precious holiday moments are preserved on various archival media, it might be our memory of seeing these events “played back” that is stronger than our actual remembrance of them. As Paul Simon says, everything looks worse in black and white, or in this case, what really happened pales in comparison to our print, Polaroid, movie and slide souvenirs.

..or you can whip up this warm platinum print simulation.

This means that there are a million subliminal color “cues” that trigger memory, and not all of them come from “correctly” exposed images. Color is mood, and seasonal pictures can benefit greatly from the astounding range of processing tools suddenly available to everyone. Not all photographs benefit from apps and digital darkroom massages, for sure, but their use is perhaps more seductive, in this mental mid-point between reality and memory than at other times of the year. Fantasy is in play here, after all, and fantasy has no “right” hue. Dreams are too vast a realm to be confined to the basics, so ’tis the season to dip into a wider paintbox.

Memory needs room to breathe, and the photographs that help them fully fill their lungs become the gifts that keep on giving.

THE LION IN WINTER

I  AM AMAZINGLY BLESSED TO BE ENTERING OLD AGE, STILL TRAILING MY FATHER BY ABOUT TWENTY-THREE YEARS. Defying the odds, statistical probabilities, and luck, my personal North Star is still, at 84, providing me with a point of light to steer by. I cannot  imagine a world in which he is not just a few miles ahead of me, gently insisting, “this way.” And, years after the worst the world has to offer has long since stopped generating any panic in me, the thought of life without him remains unimaginable, like trying to envision the world without gravity, or sunlight.

I can’t begin to catalogue the thousands of ways his wisdom and patience have tempered and shaped me, but it’s worth singling out  his influence on my visual sense and curiosity as a photographer. I remember his intrepid search for beauty, armed with the simple tool of a Kodak Pony 828 camera, a device which both intrigued and frustrated him. During my childhood, the Pony was the official recorder of dreams, events, and possibility for the Perkins clan. We all cheered when it delivered what Dad saw in his mind’s eye. We all offered sympathy and encouragement when he asked it to see beyond its powers, when a set of Kodachrome slides entered the “better luck next time” category.

As a designer and illustrator for North American Aviation, then, later, as a fine arts teacher, he had a developed eye for beauty, a genuine instinct for how a visual story was framed and shown. Armed with my first cheap plastic camera, I only knew I wanted my images to be as good as his own. His eagerness became my ambition, and, half a lifetime later, I still regard a picture as “good” if the old man sees something in it.

Like many photographers major and minor, I am happy to make my father a subject in my own work. I am recording, interpreting and saluting his life all at once, and trying, in my halting way, to capture, in his face, all of the wisdom I have drawn from him over a lifetime. It’s a tall order, but he always taught me to go a little bit beyond what you think you can deliver. I remember him pushing the Kodak Pony to its limits, and beyond, in impossible situations. Some projects landed with a clunk, but it was always about the next frame, the coming opportunity.

There was…is….no bad photograph. Just mileage markers on the way, toward “gee, who knows?”

Thank you, Dad, for showing me that the journey is everything.