EVERY TIME I HAVE TO MAKE PHOTOGRAPHS ON AN OVERCAST DAY, I actually pray that the weather will deteriorate even further, since a dramatically lousy sky can create better results than an indifferent overcast. Murky weather mutes colors to the texture of bland dishwater, whereas rapidly shifting, strongly contrasty conditions can actually boost colors or create a dimensional effect in which foreground objects “pop” a bit. Keep your rainy days. Give me stormy ones.

Some days an uneven, rolling overcast contains dread darkness on one side and unbroken sun on the other, simulating the effect of a studio in which the subject is floodlit from front but staged against a somber background. This strange combination of natural lighting conditions confers an additional power on even the most mundane objects, and the photographer need do nothing except monitor the changing weather from minute to minute and pick his moment.

I love the architectural features of the Los Angeles County Museum of Art, such as the section of one of the exhibit hall rooves, seen above. However, in fair or even grey weather, it has less impact than when it’s front-lit against a threatening cloud bank, so, on a rotten day, it’s worth checking and re-checking to see if it’s been amped up by “jumping away” from the background clouds. Likewise these palm trees:

Simply capitalizing on changes in lighting conditions can create more opportunities than all the lenses and gear in the world. Cheap point-and-shoot or luxuriant Leica, it’s all about the light….plentiful, free, and ever-changing. The ability to sculpt strong images from this most basic commodity is the closest thing to a level playing field for every kind of photographer.

AMERICA’S  SOUTHWESTERN STATES COME EQUIPPED WITH SOME OF THE MOST SPECTACULAR SCENERY TO BE HAD ANYWHERE ON EARTH; jutting crags, yawning canyons, vast valleys, and more sky than you’ve ever seen anywhere. Photographically, the mountains, mesas and arroyos deliver on drama pretty much year-round, while the sky can be an endless expanse of, well, not much, really. Compositionally, this means rolling the horizon line in your framing pretty far toward the top, crowding out a fairly unbroken and featureless ocean of blue….except for more humid summer months, when cloud formations truly steal the scene.

It’s true: as the storm season (sometimes called the “monsoon”, for reasons that escape me) accompanies the year’s highest temperatures in desert regions, rolling, boiling billows of clouds add texture, drama, even a sense of scale to skies in Arizona, Utah, New Mexico, and California. It’s like getting free props for whatever photographic theatre you care to stage, and it often makes sense to rotate your horizon line back toward the bottom of the frame to give the sky show top billing.

Early photographers often augmented the skies in their seascapes and mountain views by layering multiple glass negatives, one containing ground features, the other crammed with “decorator” clouds. The same effect was later achieved in the darkroom during the film era. Hey, any way you get to the finish line. Suffice it to say that the harvest of mile-high cloud banks is particularly high in the desert states’ summer seasons, and can fill the frame with enough impact to render everything else as filler.

I still marvel at the monochrome masterpiece by Life magazine’s Andreas Feininger, Texaco Station, Route 66, Seligman, Arizona, 1947, which allows the sky overhead to dwarf the photo’s actual subject, creating a marvelous feeling of both space and scale. I first saw this photo as a boy, and am not surprised to see it re-printed over the decades in every major anthology of Life’s all-time greatest images. It’s a one-image classroom, as all the best pictures always are. For more on Feininger’s singular gift for composition, click the “related articles” link below.

Big Sky country yields drama all along the America southwest. And all you really have to do is point. 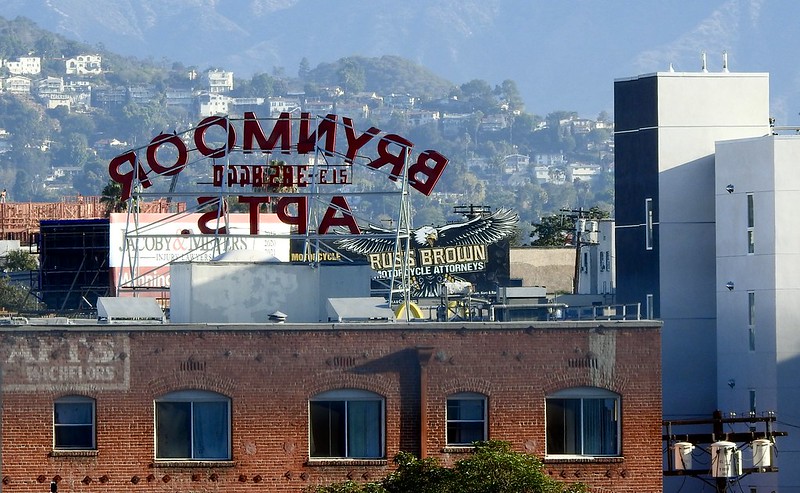