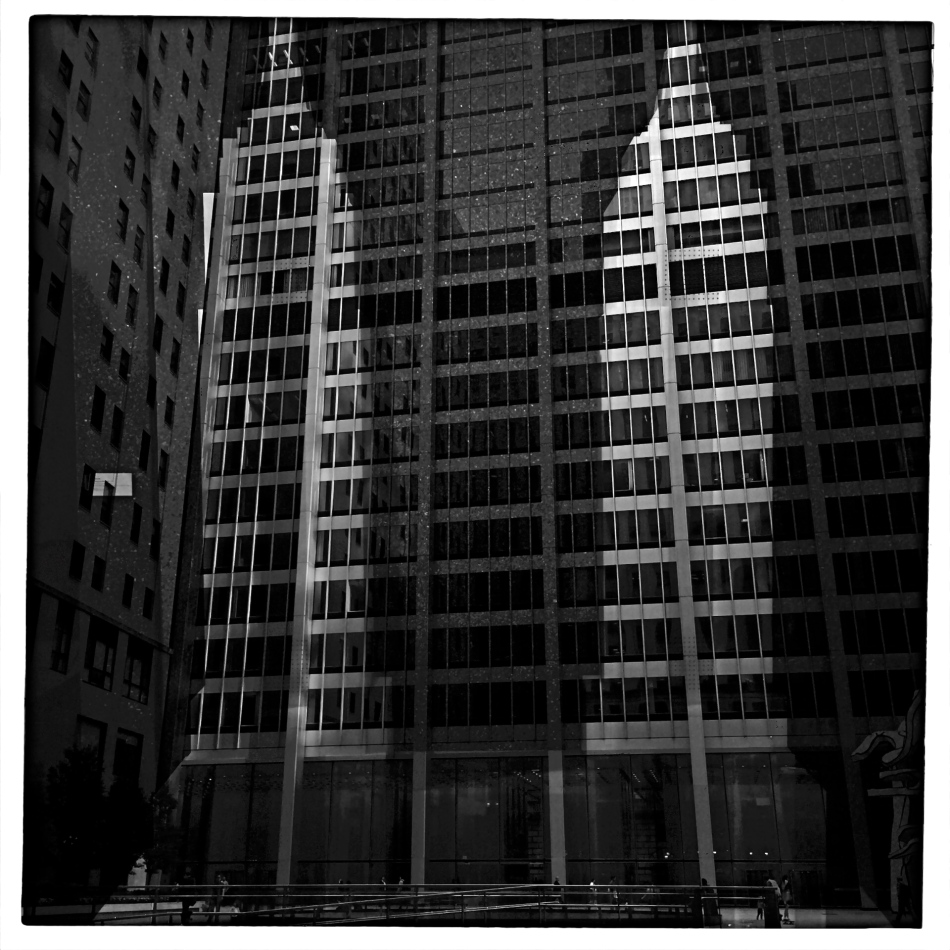 Reverse Shadows (2015) Originally conceived in color, later converted to black and white. Luckily, it worked out, but, shooting this image anew, I would  execute it in monochrome from start to finish. Every story has its own tonal rules.

THE WORLD OF PHOTOGRAPHY’S EMBRACE OF COLOR, which now seems instinctual and absolute, is actually a very recent thing. The arrival of color film stock targeted to the amateur market barely reaches back to the 1920’s, and its use in periodicals and advertising didn’t truly begin to outdistance color illustration until well after World War II. Color in so-called “serious” or “art” photography existed on the margins until half-way through the 1960’s, when hues, like every other element of the contemporary scene, gloriously exploded, creating a demand for color from everyone, amateur to pro. The ’60’s was also the first decade in which color film sales among snapshooters surpassed those of black and white.

Today, color indeed seems the default choice for the vast majority of shooters, with the “re-emergence” or “comeback” of black and white listed among each year’s top photo trend predictions. The ability to instantly retro-fit color images as monochrome (either in-camera or in-computer), has allowed nearly anyone to at least dabble in black & white, and the tidal wave of phone apps has made converting a picture to b&w an easy impulse to indulge.

And yet we seem to be constantly surprised that black & white has a purpose beyond momentary nostalgia or a “classic look”. We act as if monochrome is simply the absence of color, even though  we see evidence every day that b/w has its own visual vocabulary, its own unique way of helping us convey or dramatize information. Long gone are the days when photographers regarded mono as authentic and color as a garish or vulgar over-statement. And maybe that means that we have to re-acquaint ourselves with b&w as a deliberate choice.

Certainly there has been amazing work created when a color shot was successfully edited as a mono shot, but I think it’s worth teaching one’s self to conceptualize b&w shots from the shot, intentionally as black and white, learning about its tonal relationships and how they add dimension or impact in a way separate from, but not better than, color. Rather than consistently shooting a master in color and then, later, making a mono copy,  I think we need to evaluate, and plan, every shot based on what that shot needs.

Sometimes that will mean shooting black and white, period, with no color equivalent. Every photograph carries its own burden of proof. Only by choosing all the elements a picture requires, from color scheme to exposure basics, can we say we are intentionally making our images. 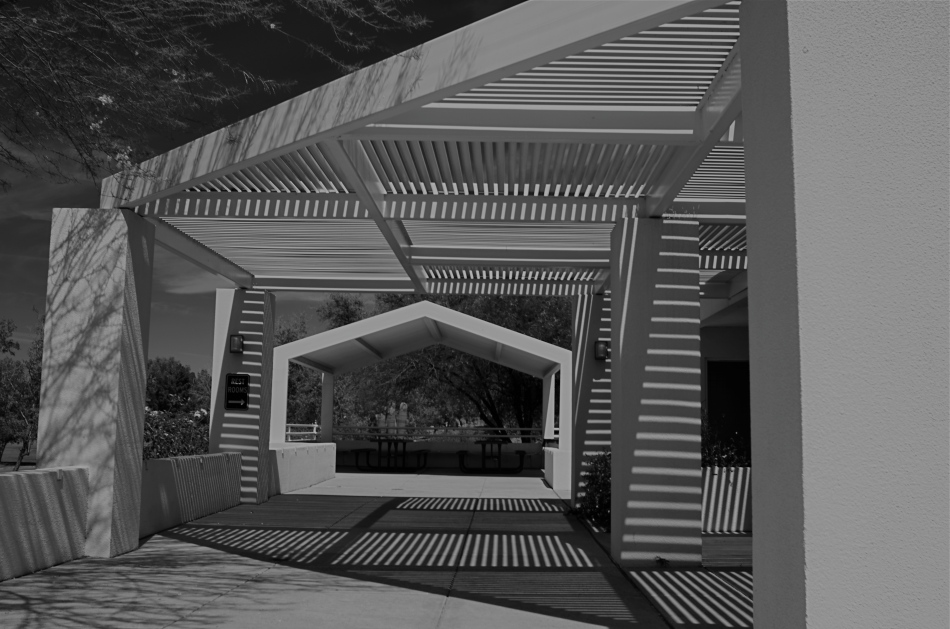 COLOR PHOTOGRAPHY WAS NOT UNIVERSALLY WELCOMED at its initial introduction, and was even actively avoided for the most part by the likes of Ansel Adams and Edward Weston, who mistrusted the technology of early color reproduction as garish, unnatural. While the amateur world largely lauded color as more “real”, Ansel & co. countered, between clenched teeth, “that ain’t the point”. Their argument: black and white was an artistic interpretation of reality, not a reproduction of it, whereas color was erroneously assumed by the public to be a more accurate record, even though it also suffered from its own biases and excesses. Some of the early masters never really came to be at peace with color, although they shot in it, and did foresee a time when photographers would choose it over b&w not for novelty’s sake, but because of what a particular project demanded.

I sometimes begin planning a shot in color, only to find that it provides too many choices for the eye. That is to say, all tones will register as distinctly different from each other, and this may make for too much information, blocking the clarity of the photo’s design. The result may be beautiful, but it may also diminish the impact of the final picture. In these cases, it’s worthwhile to at least work up a monochrome vision of my shot to see if it communicates more directly.

In a situation like the above pattern of shades and light shafts, color gives you brilliant blues and off-whites for the darks and lights, and  a real hodge-podge of hues in all the crannies of the metal grids. However, rather than de-saturate the color to make b&w, I found it better to shoot the master image in black and white, using a red filter and a polarizer to maximize contrast, forcing all the dark and light shades into two hard-line general values. This forces the design to be the primary attention-getter, eliminating the distraction inherent in a full raft of colors. That is, if the deepening composition of gridwork is the main message of the photo, then it makes sense to get the color out of the way of that story and see if it helps.

In the end, Uncle Ansel had it all psyched out:

When I’m ready to make a photograph, I think I quite obviously see in my mind’s eye something that is not literally there in the true meaning of the word. I’m interested in something which is built up from within, rather than just extracted from without.

Yeah, what he said.

I’M DREAMING OF A ‘CHROME CHRISTMAS 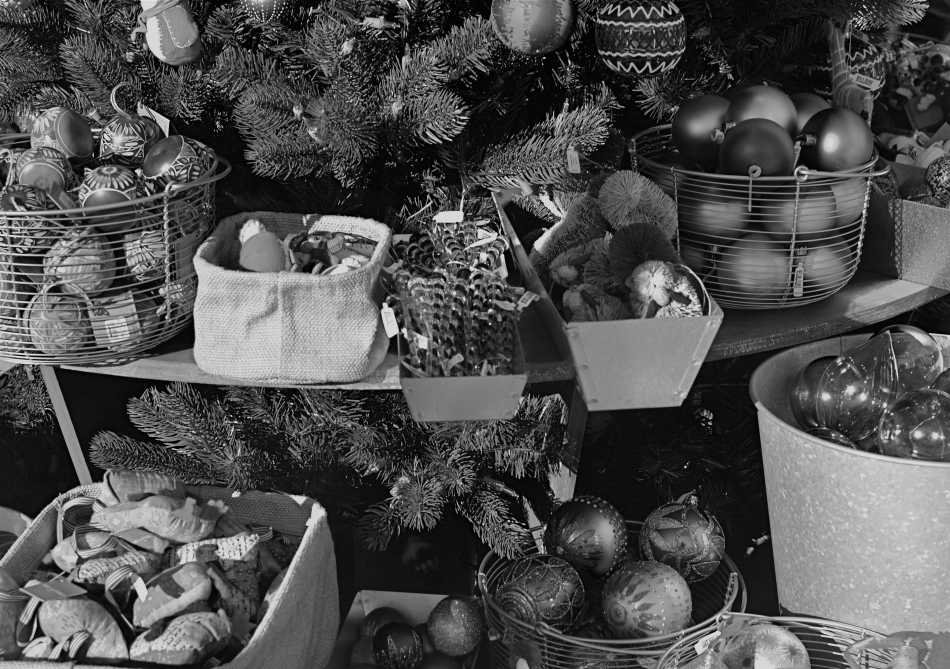 IF YOU HAVE BEEN ON THE PLANET FOR MORE THAN FIFTY CHRISTMASES, your holiday memories (at least those frozen in family snapshots) will include more than a few black and white images. Some families made the switch to color photography earlier than others, but, at least until the mid-1960’s, for millions of us, more than a few “our best tree ever” photos were shot in monochrome. A little web research or family album-browsing can illustrate just how well beloved memories were captured by millions of us, long before Kodachrome became the visual currency of family folklore.

It’s interesting to note that, with the universal availability of not only simple cameras but post-processing apps, there’s been a sort of retro-fed love of b&w that’s refreshing, given that we are, once again, admitting that some subjects can be wonderfully rendered in a series of greyscale tones. Certainly the general marketing and depiction of the season is a color-drenched one, but many new photographers are re-discovering the art of doing more with less, or, more properly, seeing black and white as an interpretation of reality rather, as in the case of color, as a recording of it.

Observing the season out in the American West, thousands of miles from loved ones, I find that my holiday shots are increasingly journalistic or “street” in nature, since I am viewing and interpreting other people’s Christmases. The contours and designs of retail become a vibrant source of stories for me, and black and white allows me to shoot at an emotionally safe distance while calling special attention to texture and detail.

Depending on whether you’re showing the splendor of food and presents or evoking some Dickens-era urban grit, some subjects will come up flat or drab in black and white, given our very specific memory cues as to what Christmas should “look like”, so getting the desired result may be elusive. But, of course, if photography was easy, everyone would do it.

Oh, wait, everybody does do it.

Thing is, you always add another voice to the creative conversation. That’s the best part of both photography and the holidays.

No way is best but your way.