I AM OFTEN ASKED WHY ARCHITECTURE FIGURES SO STRONGLY in my photography, and I can only really put part of my answer into words. That’s what the pictures are for. I imagine that the question itself is an expression of a kind of disappointment that my work doesn’t focus as much on faces, as if the best kind of pictures are “people pictures”, with every other imaging category trailing far behind. But I reject that notion, and contend that, in studying buildings, I am also studying the people who make them.

Buildings can be read just as easily as a smile or a frown. Some of them are grimaces. Some of them are grins. Some of them show weary resignation, despair, joy. Architecture is, after all, the work of the human hand and heart, a creative interpretation of space. To make a statement? To answer a need? The furrowed brows of older towers gives way to the sunny snicker of newborn skyscrapers. And all of it is readable.

In photography, we are revealing a story, a viewpoint, or an origin in everything we point at. Some buildings, as in the case of the first newly rebuilt World Trade Center (seen above), are so famous that it’s a struggle to see any new stories in them, as the most familiar narratives blot the others out of view. Others spend their entire lives in obscurity, so any image of them is a surprise. And always, there are the background issues. Who made it? What was meant for it, or by it? What world gave birth to this idea, these designs, those aims?

Photography is about both revelation and concealment. Buildings, as one of the only things we leave behind to mark our having passed this way, are testaments. Read their faces. No less than a birthday snapshot, theirs is a human interest story. 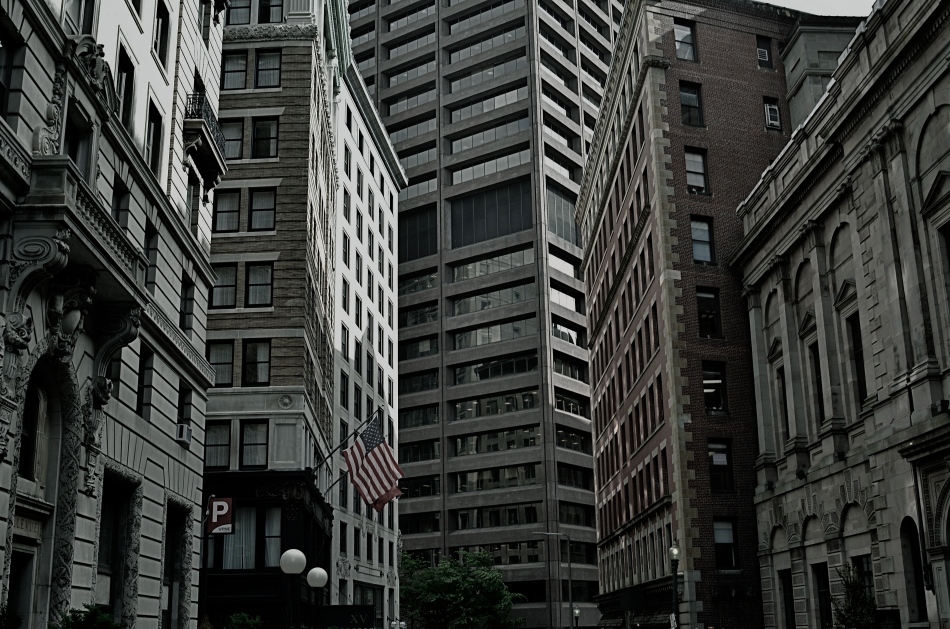 Yes, you could find a more frustrating job than making city maps for Boston streets. But you’d have to look hard….

WHEN WE THINK OF URBAN BLOCKS, IT’S NATURAL TO THINK of those blocks as regular rectangles, well-regulated, even streets that run at direct parallels or hard right angles to each other. And while there certainly are cities with such mathematically uniform grids, some of the most interesting cities in the world don’t conform to this dreamy ideal in any way. And that means opportunities for photographers.

We’ve all seen street scenes in which the left and right sides of the road vanish directly toward the horizons, like staring down the middle of a railroad bed. But for the sake of dramatic urban images, it’s more fun to seek out the twisty mutants of city design; the s-and-z curves, the sudden zigzags, the trapezoids and triangles which signify confusion to cabbies and pedestrians but which mean good times for photogs. Let’s face it; snapping pictures of orderly things gets old fast. The very nature that makes us idealize “rightness” also makes us want to photograph “wrongness.”

That’s why I love to shoot in towns where the city was laid out with all the logic of the Mad Hatter on speed, those streets that seem barely coherent enough to admit the successful conduct of trade. Cities where locals and visitors alike curse the names of the urban planners, if there ever had been planners, if there ever had been a plan. A grand collision of avenues and alleys that looks like a kid whose teeth are crowding together in a greedy orthodontist’s dream fantasy. In such cities, including Manhattan, Pittsburgh, San Francisco, Boston and many others, “order” is a relative term. There are precious few neat streets vanishing back to infinity, politely lined by cooperative structures queueing up parallel to the curb. And that’s my kind of living, breathing… chaos.

As a mild example, consider the Boston street shown above, on which nearly every building seems slightly askew from every other building, sitting on foundations that jut out at every conceivable angle and plane. It’s a grand, glorious mess, and a much more interesting way to show the contrasting styles that have sprouted in the neighborhood over the centuries. It’s reality that looks like an optical illusion, and I can’t get enough of it.

A straight line may be the shortest distance between two points, but it’s also the least interesting. Go find cities that make no sense, God bless ’em.