You can convert a color shot through the “old Kodachrome” filter on the AltPhoto app…..

THE HOLIDAY SEASON MAY OFTEN SEEM TO HAVE “OFFICIAL” COLORS, (red, green, etc.) but its unofficial colors reside primarily, and gloriously, in memory. Given how many iterations of photography span most of our lives, our minds tend to twist and tweak colors into highly individualized chromatic channels. Are your most treasured moments in ’50’s Black and White? ’60’s Kodachrome? In the time-tinted magentas of snaps from the 70’s? In blue-green Super 8 Ektachrome or expired Lomo film? Or do you dream in Photoshop?

This is personal stuff, very personal. It seems like we ought to agree universally on the “correct” colors of the season, but, given that our most precious holiday moments are preserved on various archival media, it might be our memory of seeing these events “played back” that is stronger than our actual remembrance of them. As Paul Simon says, everything looks worse in black and white, or in this case, what really happened pales in comparison to our print, Polaroid, movie and slide souvenirs.

..or you can whip up this warm platinum print simulation.

This means that there are a million subliminal color “cues” that trigger memory, and not all of them come from “correctly” exposed images. Color is mood, and seasonal pictures can benefit greatly from the astounding range of processing tools suddenly available to everyone. Not all photographs benefit from apps and digital darkroom massages, for sure, but their use is perhaps more seductive, in this mental mid-point between reality and memory than at other times of the year. Fantasy is in play here, after all, and fantasy has no “right” hue. Dreams are too vast a realm to be confined to the basics, so ’tis the season to dip into a wider paintbox.

Memory needs room to breathe, and the photographs that help them fully fill their lungs become the gifts that keep on giving. 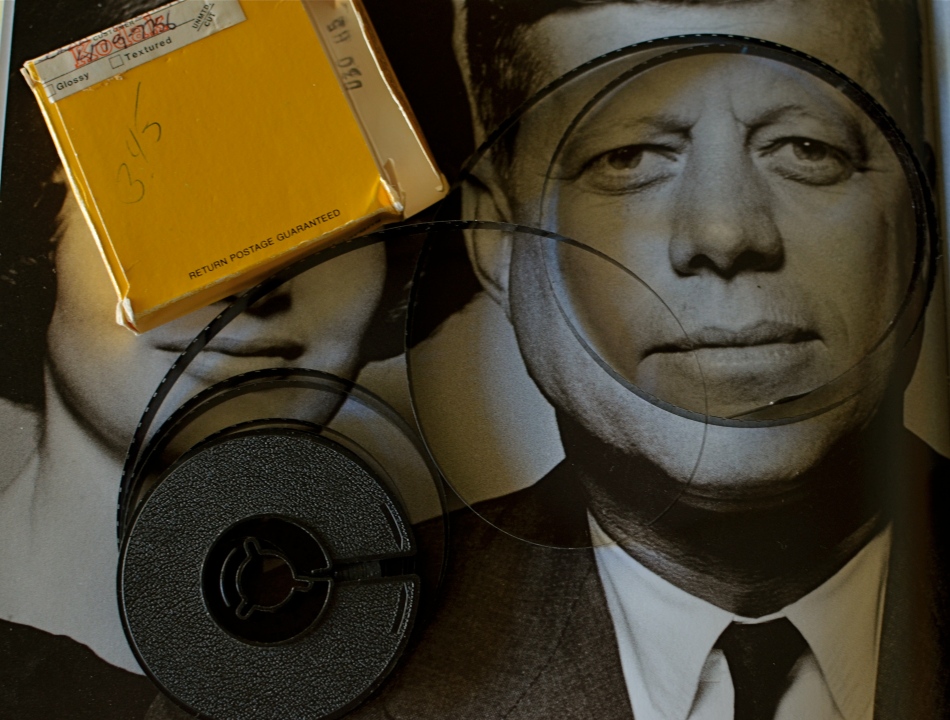 The Dallas women’s wear designer, a refugee from Soviet Russia and a Democrat, was eager to take a break from his office on November 22, 1963 to head down to the city’s Dealey Plaza, accompanied by his receptionist, to get a look at the man for whom he had voted three years earlier. An assistant  suggested he first swing by his house and pick up his movie camera, a Bell & Howell Zoomatic “Director” Model 414 PD.  Standing on a concrete pedestal,  framing the presidential motorcade as it made its turn onto Elm Street, Zapruder, too stunned by what he was seeing through his viewfinder to even stop, captured 26.6 seconds that would document the world’s shift from innocence to agony.

He had no sophisticated experience documenting news stories. He had never taken a course on photography. Understandably, for the rest of his life, he could never again even bring himself to shoot either still or movie images. But that day, he had a camera. And if anything of Abraham Zapruder’s unique role in the Kennedy tragedy is emblematic of the fatefulness of photography, of being present when things are ready to happen, it is those 486 frames of Kodachrome, footage that no one….no news service, no network, no freelancer…nobody but a dressmaker with an amateur camera was poised to capture.

Because of Abraham Zapruder, the chaos and fear of those seconds now represent a time line, a sequence. The event has parameters, colors. Tone. Zapruder’s camera transformed him from “a” witness to “the” witness,  the image maker of record, just as it had for others when the Hindenburg erupted into flame, the Arizona billowed black smoke, and, a generation later, Challenger painted the sky with a billion fiery atoms.

Half a century later, the multiplier effect of personal media devices guarantees that each key event in our history is documented by hundreds, even thousands of witnesses at once, but, on that horrible day in Dallas,  Abraham Zapruder’s preservation of murder on celluloid was an outlier, an accident. And by the end of Friday, November, 22, 1963, the day the world unspooled, he was no longer merely a tourist taking a home movie. He was the sole possessor of Exhibit A.

THE LION IN WINTER

I  AM AMAZINGLY BLESSED TO BE ENTERING OLD AGE, STILL TRAILING MY FATHER BY ABOUT TWENTY-THREE YEARS. Defying the odds, statistical probabilities, and luck, my personal North Star is still, at 84, providing me with a point of light to steer by. I cannot  imagine a world in which he is not just a few miles ahead of me, gently insisting, “this way.” And, years after the worst the world has to offer has long since stopped generating any panic in me, the thought of life without him remains unimaginable, like trying to envision the world without gravity, or sunlight.

I can’t begin to catalogue the thousands of ways his wisdom and patience have tempered and shaped me, but it’s worth singling out  his influence on my visual sense and curiosity as a photographer. I remember his intrepid search for beauty, armed with the simple tool of a Kodak Pony 828 camera, a device which both intrigued and frustrated him. During my childhood, the Pony was the official recorder of dreams, events, and possibility for the Perkins clan. We all cheered when it delivered what Dad saw in his mind’s eye. We all offered sympathy and encouragement when he asked it to see beyond its powers, when a set of Kodachrome slides entered the “better luck next time” category.

As a designer and illustrator for North American Aviation, then, later, as a fine arts teacher, he had a developed eye for beauty, a genuine instinct for how a visual story was framed and shown. Armed with my first cheap plastic camera, I only knew I wanted my images to be as good as his own. His eagerness became my ambition, and, half a lifetime later, I still regard a picture as “good” if the old man sees something in it.

Like many photographers major and minor, I am happy to make my father a subject in my own work. I am recording, interpreting and saluting his life all at once, and trying, in my halting way, to capture, in his face, all of the wisdom I have drawn from him over a lifetime. It’s a tall order, but he always taught me to go a little bit beyond what you think you can deliver. I remember him pushing the Kodak Pony to its limits, and beyond, in impossible situations. Some projects landed with a clunk, but it was always about the next frame, the coming opportunity.

There was…is….no bad photograph. Just mileage markers on the way, toward “gee, who knows?”

Thank you, Dad, for showing me that the journey is everything.

YEARS AFTER, AS A YOUNG BOY, I FIRST SAW KODACHROME SLIDES PROJECTED ONTO OUR LIVING ROOM WALL, I learned that the first popular projectors had actually been called “magic lanterns” How right they were, and what an incredible spell these flashes of color and light wove for a little boy breathless in the familiar, yet miraculous dark.

It wasn’t that, as a family, we didn’t have dozens of albums crammed with traditionally processed prints of our most treasured moments. It’s just that, in the shadows, those clear, color-soaked images, half a wall in size, took on a life of their own. Bigger. More immediate. And as communal as a trip to the theatre. Only this was our theatre….our lore, our legend, writ large, compelling somehow in its size and scale.

Father’s Day is always a poignant time for me, since my life is insanely blessed. For me to be in the last third of my own life, and to still have the author of so many of my dreams still on the scene, still available to teach and direct my visions, as he did so ably then….well, it’s everything, that’s all.

As a father myself, I learned that it’s not always possible to transmit your passions to your children. Sometimes they don’t want to follow dear old Dad into whatever passionate pursuits he’s chosen for his own life. The fact that, sometimes, your kids “get” what even a part of you is really about is amazing, and, in the case of my father, I was lucky enough to be struck by the same lightning that hit him when it came to the graphic image….drawn or painted, realized in solid space in sculpture, or frozen on film. Photographs to him were another way of teaching himself to select, to edit, to choose something magical to depict or interpret, and he let me be the sorcerer’s apprentice.

Early into the Christmases of my adolescence, the power of our family albums was left in the dust as our memories began to shine and glow in our living room with the arrival of Dad’s new Bell & Howell 500 slide projector. It was Cinemascope, Cinerama, and the video wall from The Jetsons all in one, and I was mesmerized. The arrival of every yellow, flat box of new Kodak slides, all the way from the regional processing plant in Findley, Ohio, was like the reveal of a stage magician. I had caught the fever. I wanted to make pictures, too.

The best statement I can make, all these years later, about the wonder of projected images was expressed several years ago on the Mad Men TV series, when adman Don Draper has the chance to make a fictional pitch to Eastman Kodak on how to market and name its new series of home slide projectors. And, even though our home projector used a “cube” tray instead of the wheel on Kodak’s “Carousel”, the magic was the same. Draper’s pitch began with the very essence of family memory:

“In Greek, ‘nostalgia’ literally means ‘the pain from an old wound’.

It’s a twinge in your heart, far more powerful than memory alone.

This device isn’t a spaceship, it’s a time machine. It goes backward and forwards, and it takes us to a place where we ache to go again.

It’s not called ‘The Wheel’. It’s called ‘The Carousel’ It lets us travel the way a child travels…around and around and back home again.

A place where we know we are loved. “

On this Father’s Day, as on every other, my heart is filled with memories and gratitude for the love that created them, but also a special thanks for a father who taught me the adventure, the patience, the joy of making an image. Armed with his trusty Kodak Pony 828, he taught me how to celebrate the triumphs and live with the failures, and, most importantly, to always go back to the well for another try. As both a photographer and graphic artist, he showed me that the concept is all, that it’s worth fighting for, worth worrying about, worth loving as your own special treasure.

Thanks, Dad. I love you.