PHOTOGRAPHERS PASS A VERY IMPORTANT MILEPOST when they first learn that pictures can be both reliable and unreliable narrators. As neophytes, we assume that the camera doesn’t lie, that it is a trustworthy tool for capturing the truth, a kind of optically-based lie detector. Later, we learn that, in certain hands, the camera can also distort, mislead, and, certainly, lie. It’s a heartbreaking moment for some, while it’s almost freeing for others.

Bearing witness with a camera is a noble calling, but, even among the most ethical or clear-minded image-makers, there are visual stories that can’t be plainly told, tableaux in which the scene itself is a reluctant witness. Call them pictures without ample evidence.

Shooters can certainly use their interpretive skills to play connect-the-dots in many a photo, but what can be done when there aren’t enough dots to connect? In such cases, merely starting a conversation is the best one can hope for.

I simply had to record the scene you find here. I was walking with some friends toward an urban sewer tunnel from which thousands of bats were guaranteed to emerge at sundown, when, with one of our party nearing the rendezvous, I spotted the abandoned wheelchair you see at left. Clearly this was a case in which no photograph could be expected to “explain” anything, but which was visually irresistible nonetheless. The mixture of object and place equals…what? Why would someone bring a wheelchair to a semi-remote location, and then just leave it? Did someone experience a miracle cure that obviated any further use for the device? If so, why go to the trouble of dumping it out in the sticks? How does one dispose of an unwanted wheelchair? Had someone upgraded to a better model, and thus turned their previous unit into roadside litter? Was some semi-ambulatory adventurer off on a brief stroll in the area, eventually returning to the chair to rest in before heading home? Would someone seeing a picture of my friend walking away from the chair assume he had been its occupant? If so, what would they assume happened? And, of course, was I being dishonest for even including him and the chair in the same frame?

You can see where this is all going. The frame is hardly a “gag” or “gimmick” shot, and it’s not unique among photographs (mine or others) in posing more questions than it can possibly answer. Moreover, I certainly don’t have any explanation for the chair’s appearance that makes any sense, at least to me. And yet, I wouldn’t dream of not shooting the picture, as it’s too much of an “A” example of what happens when the photo itself is a reluctant, even hostile, witness.

Seeing may indeed be believing, even if you can’t actually decide what it is you’re being asked to believe.

PHOTOGRAPHERS HAVE A CERTAIN LOVE FOR LIVING AT THE EXTREMES, in seeing how far we can stretch the limits of light, or at least our ability to harness it. It’s strange: we have plenty of the stuff available to us during the meat of the day, but it’s where night and day perform a kind of “changing of the guard” where we really like to go stealing those renegade rays of near-dark and almost-bright. We love to go trapping along the seams of light, chronicling the nether territory where night and day get spliced together.

Lately I seem to have been lucky enough to do what I call “chasing” light, standing in deep shadow as the last rays of gold fade just ahead of me. There’s an expectant quality to it, a preciousness. Suddenly it’s undeniable that something unique is dying, that another measure of our mortality is about to be checked off the list, to be irretrievably gone. It’s only the promise of another day that makes this bearable…that, and our small attempts to, if you will, freeze the goodbye.

The contrast between light and shadow at this time of day is profound, and it’s easy to either blow out the highlights or lose a ton of narrative detail in the darkness, or both. There is also incredible minute-to-minute change in the balance between dark and light, making every frame you take a kind of all-or-nothing proposition. Seconds after you’ve tried a picture, you’re actually now after a completely different picture, and so the wonderful shoot-adjust-reshoot cycle made possible by digital is an even more amazing tool.

There are amazing opportunities for image-making in both pure day and pure night. But treat yourself to the nether world between the two, and freeze a goodbye or two, if you can.

It’s wondrous out here on the borderline.

THE LAST PIECE OF THE PUZZLE

By “available light”, I mean any $%#@ light that’s available. —-Joe McNally, world-renowned master photographer, author of The Moment It Clicks

ONE OF THE EASIEST THINGS ABOUT ANALYZING THOSE OF OUR SHOTS THAT FAIL is that there is usually a single, crucial element that was missing in the final effort….one tiny little hobnail, without which the entire image simply couldn’t hold together. In a portrait, it could be a wayward turn of face or hint of a smile; in a landscape it could be one element too many, moving the picture from “charming” to “busy”. The secret to greater success, then, must lie in pre-visualizing a photograph to as great a degree as possible, in knowing in advance how many puzzle pieces must click into place to make the result work.

I recently attended an outdoor dance recital, during which I knew photography would be prohibited. I had just resigned myself to spend the night as a mere spectator, and was settling onto my lawn seat when some pre-show stretching exercises by the dancing company presented me with an opportunity. The available natural light in the sky had been wonderfully golden just minutes before, but, by the time the troupe took the stage and started into their poses and positions, it had grown pretty anemic. And then a stage hand gave me back that missing “puzzle piece”. 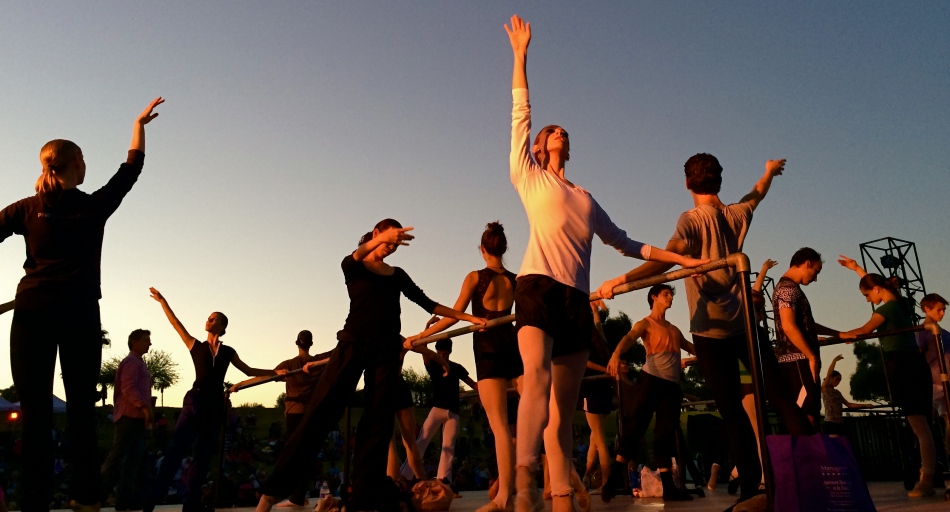 Positions, Please, 2014. One light source at dusk, courtesy of a light tech rehearsing with the rehearsers.

Climbing the gridwork at the right side of the stage, the techie was turning various lights on and off, trying them with gels, arcing them this way or that, devising various ways to illuminate the dancers as their director ran them through their paces. I decided to get off my blanket and hike down to the back edge of the stage, then wait for “my light” to come around in the rotation. Eventually, the stage hand turned on a combination that nearly replicated the golden light that I no longer was getting from the sky. It was single-point light, wrapping around the bodies of some dancers, making a few of them glow brilliantly, and leaving some other swaddled in shadow, reducing them to near-silhouettes.

For a moment, I had everything I needed, more than would be available for the entire rest of the evening. Now the physical elegance of the ballet cast was matched by the temporary drama of the faux-sunset coming from stage left. I moved in as closely as I could and started clicking away. I was shooting at something of an upward slant, so a little sky cropping was needed in the final shots, but, for about thirty seconds, someone else had given me the perfect key light, the missing puzzle piece. If I could find that stage hand, I’d buy her a few rounds. The win really couldn’t have happened without her. 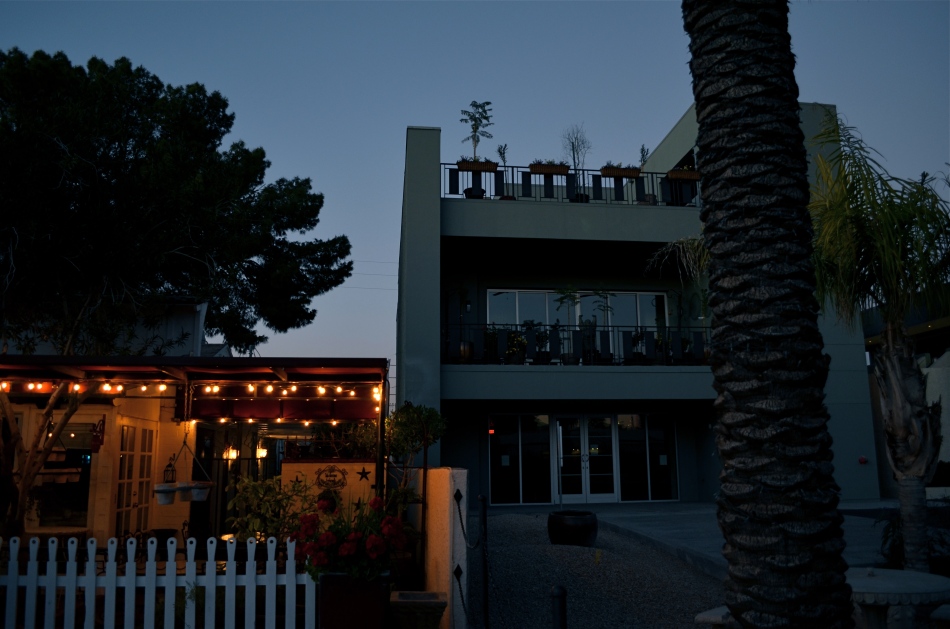 VOLUMES HAVE BEEN WRITTEN ABOUT THE WONDROUS PHENOMENON OF “GOLDEN HOUR“, that miraculous daily window of time between late afternoon and early evening when shadows grow long and colors grow deep and rich. And nearly all authors on the subject, whatever their other comments, reiterate the same advice: stay loose and stay ready.

Golden hour light changes so quickly that anything that you are shooting will be vastly different within a few moments, with its own quirky demands for exposure and contrast. Basic rule: if you’re thinking about making a picture of an effect of atmosphere, do it now. This is especially true if you are on foot, all alone in an area, packing only one camera with one lens. Waiting means losing.

The refraction of light through clouds, the angle of the sun as it speeds toward the horizon, the arrangement between glowing bright and super-dark….all these variables are shifting constantly, and you will lose if you snooze. It’s not a time for meditative patience. It’s a time for reactivity.

I start dusk “walkarounds” when all light still looks relatively normal, if a bit richer. It gives me just a little extra time to get a quick look at shots that may, suddenly, evolve into something. Sometimes, as in the frame above, I will like a very contrasty scene, and have to shoot it whether it’s perfect or not. It will not get better, and will almost certainly get worse. As it is, in this shot, I have already lost some detail in the front of the building on the right, and the lighted garden restaurant on the left is a little warmer than I’d like, but the shot will be completely beyond reach in just a few minutes, so in this case, I’m for squeezing off a few variations on what’s in front of me. I’ve been pleasantly surprised more than once after getting back home.

What’s fun about this particular subject is that one half of the frame looks cold, dead, “closed” if you will, while there is life and energy on the left. No real story beyond that, but that can sometimes be enough. Golden hour will often give you transitory goodies, with its more dramatic colors lending a little more heft to things. I can’t see anything about this scene that would be as intriguing in broad daylight, but here, the hues give you a little magic.

Golden hour is a little like shooting basketballs at Chuck E. Cheese. You have less time than you’d like to be accurate, and you may or may not get enough tickets for a round of Skee-Ball.