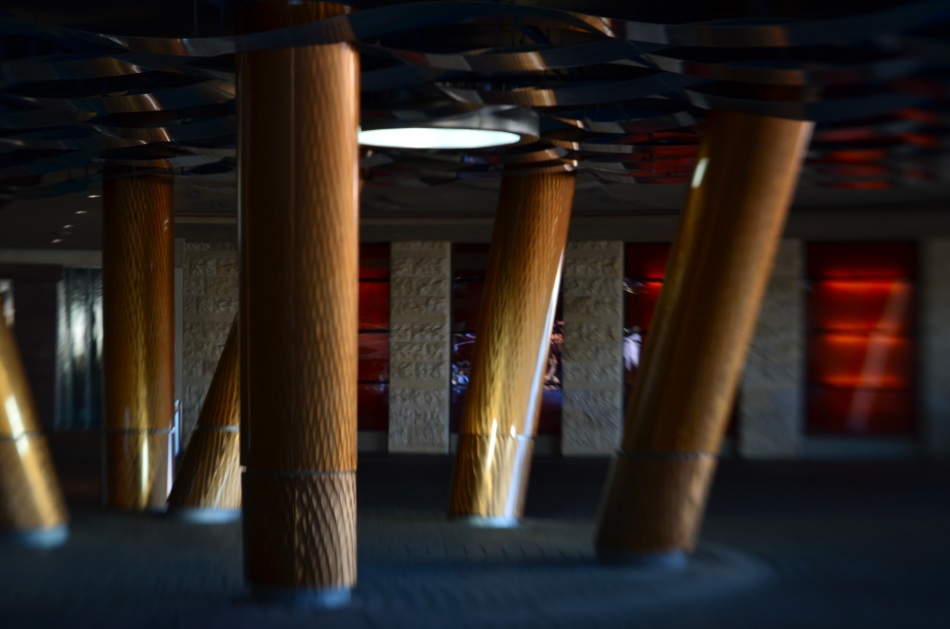 PHOTOGRAPHY’S FIRST HALF-CENTURY OR SO can be seen as a road race with the world of painting, with both runners trying to outpace each other in “realistically” depicting the world. The camera, being an actual recording machine, was first reviled, later praised as a more reliable chronicler of the actual world. Painters, in reaction, quit the reality playing field, inventing new, more abstract forms of expression like Impressionism, and left the documentary work to photogs. Or so everyone assumed.

After 1900, photographers, too embraced the idea that mere “reality” was overrated and developed their own very individualistic ways of making images, introducing the first manipulations of film, light, lenses, printing techniques and composition. Freed from the stricture of merely capturing a scene, shooters began to propose alternative visions, to interpret the world in very subjective ways. Today, one’s photographs can be as tightly naturalistic or as loosely abstract as one pleases, with some of the most impactful pictures being the ones that seem to be about nothing in particular. These “absolute” compositions, basic arrangements of color and light, may not be storytelling images in the same way that a war photo or a news snap are. They not only don’t provide explanations, they don’t even require them. The terms of engagement for such photographs are stark and simple: they’re pictures because we say they’re pictures, and they either grab you or they don’t.

My own training in photography manifested itself as a need to exercise control, to execute well and follow the rules of technique faithfully. However, my idea of getting a picture “right”, which might easily have stopped at just technical precision, has, thankfully, continued to crawl forward toward the kinds of absolutes I described before. Pictures that just are, such as the one shown here, pose a problem for me, since I have to leave the safety of things I know that “work”, entering a realm where I’m not sure where the paths are. I truly love what happens when I relax my grip on the old reliable truths and let things just happen, but it’s also a bit like walking in space: my tether could break, and I could be cast adrift.

The first time I heard someone, in speaking of one of my photographs, ask, “what’s that supposed to be?” I was stung, nervous. The question is, of course, ridiculous, as if there were only one way to represent the world, with every other way somehow counted as wrong. But the camera is not (and never was), a mere measuring and recording instrument. Over the centuries, it has been whatever we have asked of it, a seismograph of our own undulating curiosity. We learn to see by learning its operations. We learn to listen by shutting out every other sound except our own clear voice.

ANY PHOTOGRAPHER WORTH THE NAME is supposed to embrace landscapes, right? I mean, scenes of sea coasts and mountain ranges were among the first “official” subject categories photography inherited from the world of painting. The earliest pictures created with a “machine” pretended to legitimacy by capturing the same tableaux as those captured with a brush. I get that. But, as I have confessed many times in these pages, I often feel cast adrift in approaching “scenery” shots. I have more difficulty in shaping their narrative, whereas walking around a city, I feel like stories are literally laying all over the ground. I may have a general sense of what a landscape should look like, whereas I don’t always know what they are about. I have plenty of terrain, but no maps. 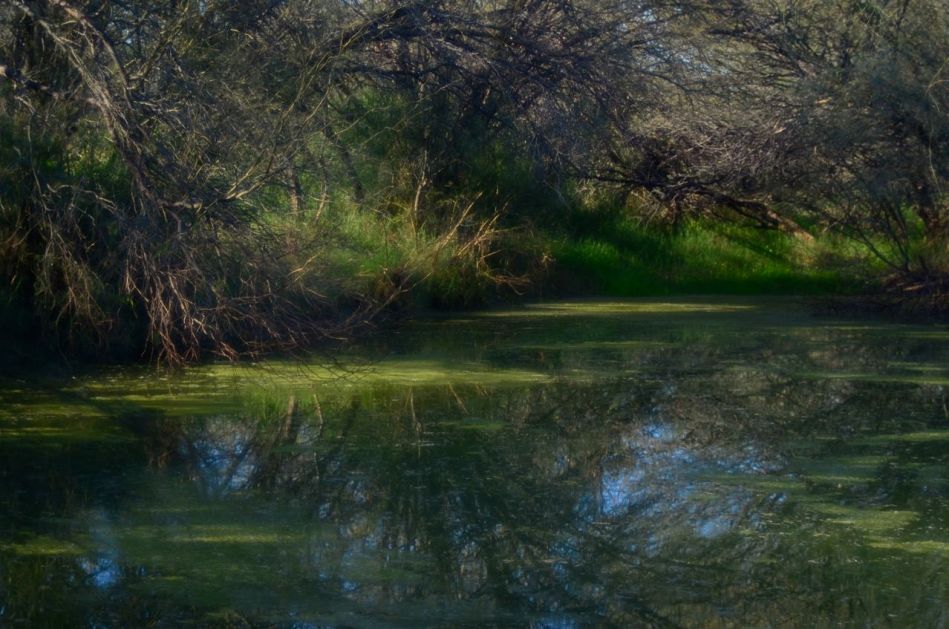 Think in terms of whatever kind of photograph you yourself feel most challenged. Do you shy away from your shorter suit because the task is too technically daunting, or because you feel unsure of what to say? It seems that landscapes often come to me without any clearly stated rules of engagement. What is a good composition? How crowded, how “busy” with visual elements can it be? Is the answer simply to render more detail than the next guy, that is, set for f/64 and show everything in tack sharpness, as if recording a scene “faithfully” were all? Or, as in the shot shown here (which I actually like), can a picture be dreamily soft and tremendously crowded with stuff, and still “work”?

The really maddening thing is that I just don’t have these inner dialogues when I’m shooting street scenes, abstracts, portraits. I don’t worry about whether a thing should be done, I just do it. Moreover, I trust myself to do it without a lot of dithering. But landscapes make me stop and worry. Maybe that pausing will lead to more deliberate thinking, and, in turn, to better pictures. The jury’s still out.

WHAT DREAMS MAY COME

MEMORY ISN’T SHARPLY DEFINED OR TIDY, and so the act of conjuring remembrance in art is never as forensically factual as sliding open an autopsy drawer. The yester-thing that we treasure most dearly are the true opposite of clinical artifacts: they are, instead, bleary, distorted, indistinct, and mysterious. Small wonder that trying to fix memory on a camera sensor is like trying to pitchfork smoke.

Creating images in an attempt to capture the past is a huge part of photography, but it’s a no-man’s land without clear markings or signs. We begin our visual argument by asserting that our version of a memory is the official one… but official according to whom? Even people who have shared a specific event will offer different testimony of what it “really” was. And that very subjective uncertainty becomes one of photography’s greatest charms.

It only took a few years for early shooters to conclude that photographs need not be confined to merely measuring or documenting the world. Early on, they enlisted fancy and whimsy to the cause of depicting memory, just as painters did. And conversely, once there was a machine like the camera to perform the task of faithfully recording “reality”, painters began to abandon it for Impressionism and everything that followed after. Both arts began, like Alice, to regularly venture out on both sides of the looking glass.

A great part of photography’s allure is in discovering how little objective reality has to be in image involving memory, and what an adventure it is to escape the actual in the pursuit of the potential. The camera lets us tell lovely lies in pursuit of the truth.

CHRISTMAS ON THE QUIET 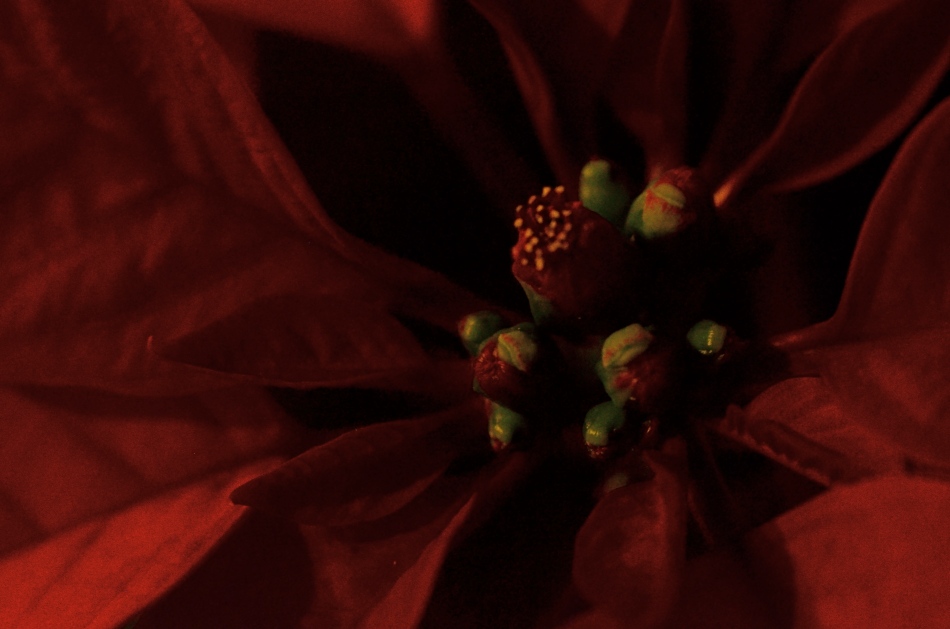 THE HOLIDAYS PROVIDE A REMARKABLE VARIETY OF VISUAL RESPONSES IN PHOTOGRAPHERS, so subjective are each person’s memories and experiences. This ensures that the subject is well nigh inexhaustible, although I seem to see images falling into one of two broad categories.

One class includes the snapshot-oriented, direct-experience images, which record one’s treasured good times……such as the family tree, the winner of the neighborhood’s exterior lights extravaganza, Bobby’s first moments with his new bike, etc. The other main class seems to center on a kind of abstract interpretation of pattern, color, and shape, and may be more subtle or understated in approach. Of these two basic groupings, one is specific, rooted in personal impressions, while the other is design or concept based. Both produce great photographs, but the aim, for each, is very distinct.

As my own Christmases have become more abbreviated and less populated (family and friends far away), my observance of the holidays is, accordingly, much more muted, less decorous than in years past. The merry little Christmas referred to in the song becomes the dominant theme, and I find my seasonal photos try to say more and more with less and less. The images are simpler, quieter. Whether I have chosen this or it’s chosen me is hard to say for sure. I only know that, as the million elements that define a busy family Christmas fade into memory, I create pictures that suggest the essence, rather than the exhaustive detail, of the holiday’s themes.

Of course, whether this time of year means anything at all to you is a matter of taste, especially as you age up. One of the most interesting places to spend the holidays, for example, is Las Vegas, simply because the town does not sport any decorations of any kind. In deference to many who want to flee rather than celebrate the hustle, the entire city becomes a strange sort of haven, filtering out both the profane and the holy. So, if I snap a picture at Caesar’s Palace on December 25, does that fact alone make the result a “Christmas” photo?

You get the idea: even in less extreme cases, the holidays are in the eye of the beholder. Eventually, what makes a day special is what makes it special for you. Whatever your own circumstances, enjoy the world as you would prefer to compose it. Make the season your personal treasure, whether loud, soft, lush or laid back. No image is a bridge too fa (la la la).

FOR SOME, UTTERING THE WORD ABSTRACTION ALOUD is like saying bringing up politics at a family get-together, in that it forces people to take sides, or to account for their taste in front of others. And when you tie that scary word to art, specifically photography, people start to forget about making pictures, and begin wondering “what it all means”, or, worse, what an image is “supposed to be about”. We start making photos like regimented school children, all of us coloring the sun the same yellow and always drawing people with eyes in the same part of their face.

Color assignments, as well as light and dark relationships, are all subject to interpretation.

Instead of using the term abstraction to describe the idea of seeing something differently, I prefer the word extraction, as if we are pulling something different out of a subject. And it’s really not that academic. When we abstract/extract something, we are changing the relationship between the object and how we typically view it. Can showing just part of its shape register in our brains differently than viewing the entire thing? If I interpret it in monochrome versus color, can I re-shape the way you look at its positive (light) or negative (dark) space?

In abstracting/extracting, aren’t we really acting like designers, taking the familiar and rendering it unfamiliar to look at how it’s made and how we interact with it? Just as a designer might decide to create a different kind of teapot, can’t we take an existing teapot and change the way it impacts the eye? That’s all extraction is; one more way to shuffle the deck.

The object at the top of the page, a rare injection-molded plastic saxophone from the 1940’s, had already been “abstracted” by its designer, since we all have a traditional way of visually “knowing” that instrument. That is, it’s supposed to be brass-colored metal, curve in such-and-such a fashion, and feature ornamentation of a set type. Prominently, the designer re-ordered the sax’s features… in plastic, with browns and purples arranged in a fluid, stylized flow of elements. That means, that, as a photographer, I begin with my  own set of expectations for the object already substantially challenged. Further, in photographing it, I can rotate the sax, compose it in the frame in an alternate fashion, reassign or intensify its colors, or, as in the small insert(which is a composite of a color negative, a monochrome negative, and a color positive), even change the relationship between surface and shadow.

There is a reason why even the police “abstract” a face into two interpretations, using both head-on and profile views in mug shots. Fact is, when you choose the viewpoint on an object, you change the interpretation of how the eye “learns” it. You extract something fresh from it . That’s the nature of photography, and scary words like “abstract” shouldn’t halt the ongoing conversation about what a picture is…or isn’t.