This view of El Capitan in the Yosemite Valley has been annually tweaked with various editing tools since being taken in 2012.

IN REVIEWING YOUR PAST PHOTOGRAPHIC WORK, you are bound to find shots that you have, for lack of a better term, outgrown. Unpack that word, and what you’re really seeing is the passage of time since you originally visualized a picture, along with the immense distance your eye and mind have traveled en route to the present day. Thus you are both benefitting and suffering from the luxury you enjoyed in being allowed to freeze time. You have not only immobilized a moment, but you have also preserved a record of what your “best practices” were at the time.

This painful but necessary re-assessment applies not only to the techniques used to create the initial image, but, in the incredibly speedy evolution of post-processing, all editing systems as well. Quite simply, if a picture is worth taking, it is worth fighting for…first by being as mindful and deliberate as possible in the taking, and then in a constant re-evaluation of how best to enhance its impact through editing. Therefore, if the first commandment of photography is Always Be Shooting, the second should probably be Never Stop Processing.

The above image is an example of this continuing dialogue. it was originally taken in 2012 and I have revisited it at least annually since then. At the time I first shot it, it was part of a three-shot bracket of exposures that were originally blended in an HDR program to try to get about the same degree of detail in both highlights and shadows….a look which can look great if done with a maximum of understatement, but which often winds up looking like an old Yes album cover under black light. From HDR, I moved on to a series of detail-enhancing programs which were more natural-looking, but still failed to deliver the punch I got from viewing the scene on-site. In one iteration, I added enhancement to a single shot alone, rather than a combination of all three bracketed images. And in 2016, I went back to the trio, mixed this time in an Exposure Fusion blender. And there’s no end in sight.

Ansel Adams, of course, famously re-visited his master negatives with up to a dozen re-mixed versions of the same scenes over decades, re-thinking his own revolutionary “zone system” for measuring exposure for every single particle of a subject, then mastering its application in the lab via burning, dodging and other means of print manipulation. I don’t work with those particular (and essentially film-based) techniques for several reasons, most of them economic. However, that still leaves me plenty of editing choices, with more gimcracks coming online every day.

Point is, pictures that are truly worth working for are also worth re-thinking, and a growing array of tools can give photographers endless ways to re-mix the hits. Of course, you will eventually come to a point where enough is enough. Historically, it’s a good thing that the Pope gave Michelangelo a deadline, or else he’d still be up on that ceiling.

BE THE CAMERA. NOW BE BETTER THAN THAT. 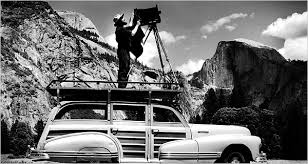 A man, a plan, a woody: Ansel Adams in his element. Yosemite’s Half-Dome is at the right.

MERELY INVOKING THE NAME OF ANSEL ADAMS is enough to summon forth various hosannas and hallelujahs from anyone from amateur shutterbug to world-renowned photog. He is the saint of saints, the yardstick of yardsticks. He is the photographer was all want to be when (and if) we grow up. His technical prowess is held as the standard for diligence, patience, vision. And yet, even at the moment we revere Adams for his painstaking development of the zone system and his mind-blowing detail, we are still short-changing his greatest achievement.

And it is an achievement that many of us can actually aspire to.

What Ansel Adams did, over a lifetime, was work his equipment way beyond its limits, milking about 2000% out of every lens, camera and film roll, showing us that, to make photographs, we have to constantly reach beyond what we think is possible. Given the slow speed of much of the film stocks and lenses of his era, he, out of the wellspring of his own ingenuity, had to make up the deficit. He had to be smarter, better than his gear. No one piece of equipment could give him everything, so he learned over a lifetime how to anticipate every need. Look at one of many lists he made of things that he might need on a major shoot:

However, the magic of Ansel Adams’ work is not in how much equipment he packed. It’s that he knew precisely what tool he needed for every single eventuality. He likewise knew how to tweak gear to its limits and beyond. Most importantly, his exacting command of the elemental science behind photography, which most of us now use with little or no thought, meant that he took complete responsibility for everything he created, from pre-visualization to final print.

And that is what we can actually emulate from the great man, that total approach, that complete immersion. If we use all of ourselves in every picture that we make, we can always be better than our cameras. And, for the sake of our art, we need to be.