Early morning in L.A., shot through a hotel wind with a polarizing filter up front of the lens.

THE DIGITAL ERA IN PHOTOGRAPHY HAS SMASHED DOWN THE DOORS TO WHAT WAS ONCE A FAIRLY EXCLUSIVE CLUBHOUSE, a select brotherhood (or sisterhood) of wizards who held all the secrets of their special science. The wizzes got great results and created “art. The rest of us slobs just took snapshots.

Today, the emphasis in photographic method has shifted from understand, study and do, to do, understand and, maybe study. We are now a nation of confident what-the-hellers. Try it, and if it don’t work, try something else. In some ways, this is a shift away from intellect and toward instinct. We are all either a little less technically aware of why the magic works, or completely indifferent to the underlying processes at work. You can all huddle together and decide whether this is a good thing.

Which, by way of introduction, is a way of saying that sometimes you do something that flies in the face of science or sense and it still works out. To illustrate, let us consider the humble polarizing filter, which, for me, is more important than many of the lenses I attach it to. It richens colors, cuts reflections, and eliminates the washed-out look of shots taken in intense daylight sun, as well as taming the squinty haze caused by smog. Or, if you want the Cliff’s Notes version, it makes skies blue again. 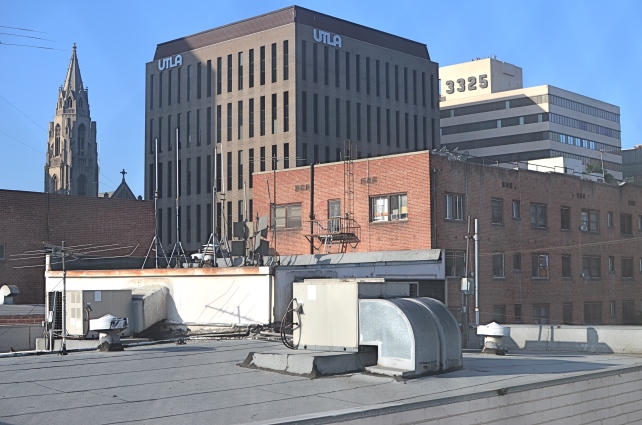 Without the filter, also through the window. Haze City.

Now there is a “proper” way to get top results with a polarizer. Make an “L” with your index finger and thumb, finger pointing straight up. UP in this example is the position of the sun overhead, and your thumb, about 90 degrees opposed to your finger, roughly represents your camera’s lens. The closer to 90 degrees that “L” is, the more effective the filter will be in reducing glare and boosting color. Experts will tell you that using a polarizer any other way will deliver either small or no results. That’s it. Gospel truth, science over superstition, settled argument.

That’s why I can’t explain the two pictures in this post, taken just after sunrise, both with and without the filter. In the first, seen at left, Los Angeles’ morning haze is severe, robbing the rooftop image of contrast and impact. In the second, shown above, the sky is blue, the colors are intense and shadows are really, well, shadows. But consider: not only is the sun too low in the sky for the filter’s accepted math to work, I am standing inside a hotel room, and yet the filter still does its duty, and all is right with the world. If I had followed and obeyed package directions, this shot should not have worked. That means if I were to pre-empt myself, defaulting to what is scientific and “provable”, and ignoring my instinct, I would not even have tried this image. The takeaway: perhaps I need to preserve just enough of the ignorant noobie I once was, and let him take the wheel sometimes, even if the grown-up in me says it can’t be done.

The yin and yang wrestling match between intellect and instinct is essential to photography. Too much science and you get sterility. Too much gut and you get garbage. As usual,the correct answer is provided by what you are visualizing. Here. Now. This moment.

EVERY MAJOR CITY AROUND THE WORLD THAT BOASTS BOTANIC GARDENS OR PLANT CONSERVATORIES HAS EXPERIENCED THE STRANGE MIXTURE of biology, art, and science created by the glass installations of Dale Chihuly. Beginning as a starving student in Venice in the late ’60’s, Chihuly has carved out a unique niche for himself as the premier maestro of art glass creations, marked by strange, venous bulbs, eerie tendrils, and massive towers of color, all wrought together in a psychedelic weave of texture and (frequently) enormous scale. If Peter Max blew glass instead of spewing paint, he’d be Dale Chihuly. Like Max, Chihuly has benefited greatly from the ever-hot debate over the permanence or value of his work. And if you don’t like it, he, in the words of Liberace, cries all the way to the bank. 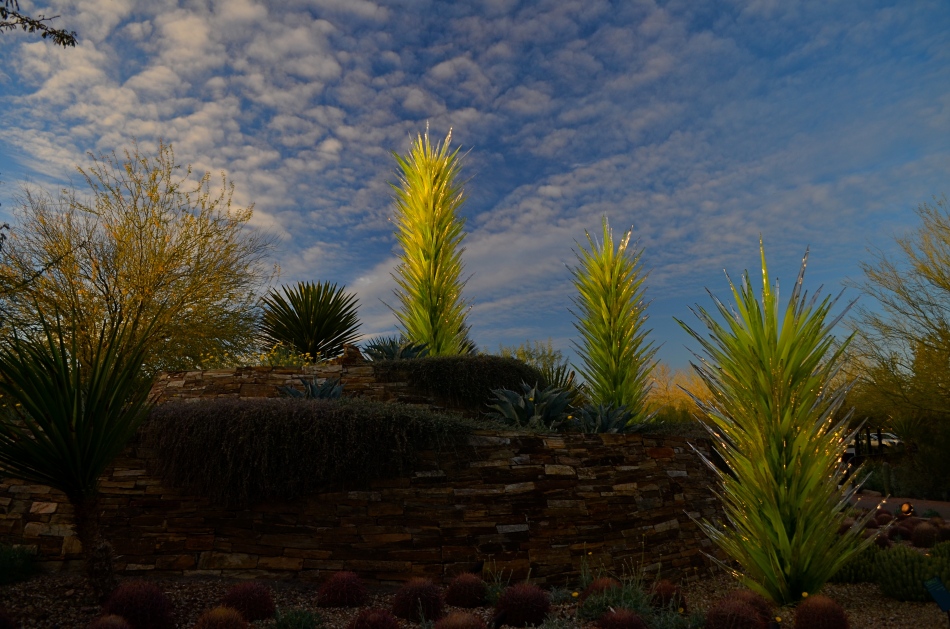 For the botanical denizens of the non-profit universe, however, the Chihuly phenomenon does have one indisputable trait: it puts butts in the seats. Gardens the world over record insane increases in attendance far beyond their normal “fan base” when Dale’s gorgon-like creations hit town and go mano-a-mano with their daisies and daffodils. For photographers, the juxtaposition of the organic and the “alt-ganic” is irresistible, and, here in the southwest, where sun is all, the extreme effects of our desert light give Chihuly’s glassworks a supernatural quality.

The Arizona “golden hour” just before final sunset produces very deep and intense color, and the Chihuly works installed at Phoenix’ Desert Botanical Garden catch it like neon prisms. Go a little further and add, say, a polarizing filter to this natural  amplification of color, and the hues go into overdrive. It’s Golden Hour on steroids.

The three glass “bushes” in the above frame, installed permanently at the DBG’s guest arrival area, are high enough above average terrain to act as light blotters for the late afternoon light. The addition of the polarizing filter seems to double the effect, although it will deepen and darken shadows in other parts of the images, and so exposure choices become a mite trickier. In this case, the striated clouds overhead also benefited from the tweak as they stood in sharper contrast against the sky, but, full disclosure, that part was dumb luck.

But hey, even dumb luck can make you a little smarter. And buy you a bigger chunk of “luck” next time. Does Dale do it for me as an artist? Does it even matter? His stuff creates light opportunities, and you can serve me up a plate of that anytime.

IT’S NOT HARD TO RETURN FROM A SHOOT WITH FAR LESS THAN YOU HOPED FOR, BECAUSE IT HAPPENS SO MUCH OF THE TIME. Coming home with a sack full of visual Christmas that you hadn’t even thought to ask for is far more rare. With that in mind, I have just opened an entire tree-ful of treasures upon flying back from my first visit to New Mexico in three years. Maybe that should be trees full, given the golden glow of the entire state under a wash of autumnal cottonwoods during my time there.

As covered in the previous post, Redemption, One Frame At A Time , I was returning to NM for personal reasons, but also to tackle the problem of color “softness” that blunted the impact of some of my shots from previous trips. The blistering brilliance of sunlight in the southwestern states is unlike anything photographers will face within the USA, and what looks like “blue” sky to your naked eye will often register as pale blue or even white once the shutter snaps. Here in Phoenix, Arizona, I’ve learned to make a few basic exposure adjustments to compensate over the years, but recently I have also begun to attach a polarizing filter to cut the way-crazy glare of midday, and I was eager to see what could be accomplished in New Mex, where my destination would be another 4,700 feet above sea level higher, and even more blinding in its intensity. 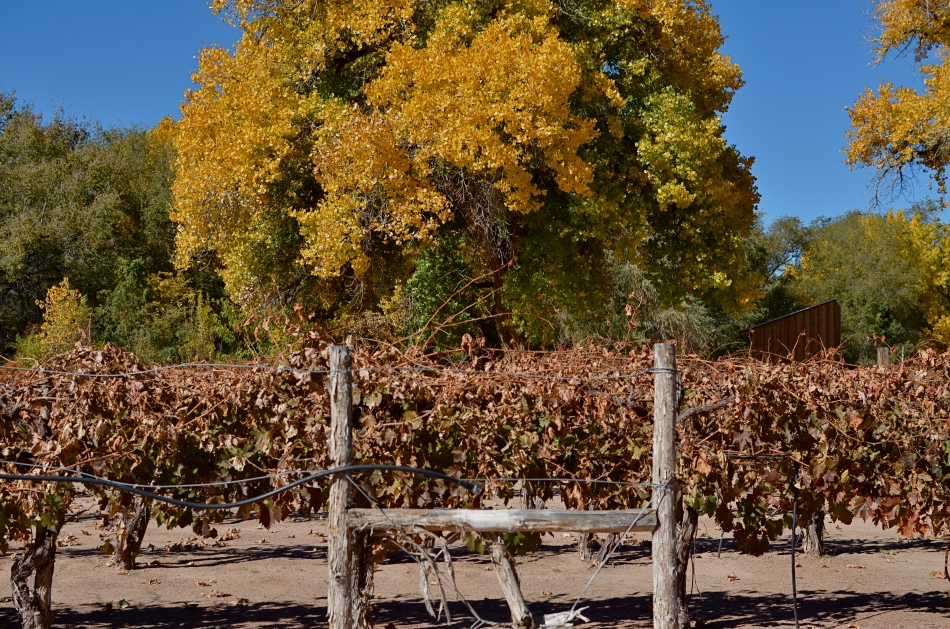 Once I got to the tiny town of Abiquiu, the historic landing point of painter Georgia O’Keeffe, I realized that, along with rendering the skies the correct blue, the filter was also going to produce an intense yellow as contrast, since the area’s native cottonwoods were exploding with gold, softening the harsher terrain and popping against the sky with a near-neon vibrancy. Having lived in the southwest for nearly fifteen years, I had long ago learned to live without the full range of hues that were a given, in states where the seasons are visually more defined. It was like coming home.

Golden leaves, earth tones, weathered wood, sand and stone all combined to deliver a textbook autumn for my grateful eyes, and I proceeded to hammer the shutter button until my arthritis threatened to end the party. Reaping an unexpected harvest is the best part of photography.

It’s the perpetual thrill of hearing light saying:  See what happens when I do……this.