NIGHT SHOTS IN CITIES SEEM TO BE A SIMPLE CHOICE BETWEEN HAND-HELD OR TRIPOD, but those are only the most basic decisions to be made, depending on the texture and mood you’re trying to build into your images. Of those two main choices, many more are opting for hand-held because of convenience and speed, bypassing interference from security people, passers-by, weird weather,etc. And, let’s face it: it’s easier than ever to deliver a readable night photo without the long exposures that used to absolutely necessitate a tripod, especially if you are not worried by the need to either use a wide aperture (thus shallow depth of field) or increased ISO (inviting more digital noise and a decidedly “smudgy” look in the deeper shadows. If you are in the hand-held camp, you’ve got plenty of company.

Tripod people are dedicated, patient, and doomed to travel less lightly, composing longer exposures in darkened conditions and sweating the unwanted artifacts, from wild pixels to smears of people and lights, that will be baked into shots lasting a few seconds or longer. But to rescue a ton of texture and detail from darkened buildings with a minimum of noise, there is no look like a well-modulated time exposure.

Beyond these two big choices, however, lie the deeper, more subtle reasons we like to shoot cities at night. Some towns flood nearly every important building with light, much of it of the sodium-vapor variety, which is long on orange. And that can mean that a mysterious, brooding quality might be totally unattainable, either three-legged or hand-held, with no way to underexpose or suggest something not absolutely spelled out in neon, in even short exposures.

I personally love to to look for the more neglected sectors of cities, those “London after midnight” kinds of streets where dark means dark. I love to underexpose them a bit as well, ensuring that all the details of the structure are not revealed, all the better to let your mind wander. If my subject has prominently lit windows, I have to tweak and tease to render them in a kind of incandescent amber, but I decide in the moment whether the exterior should be pure black, blue-black, or even amber-black, as if the window light has spilled onto the surrounding textures. And, yes, I might decide that the more ashen, grainy look of high ISO is just what I’m looking for in that moment.

Tripods used to be a do-or-die proposition for night images, but the freedom of hand-held shots carries with it a whole distinct set of decisions, since there is no typical camera, no typical subject, and no typical result. The only thing that truly matters is what you want to see coming out of the camera, be it long shot or short snap.

IF YOU TRAVEL ENOUGH, YOU’LL DISCOVER THAT, OF ALL THE TIMES YOU WANT to take a photograph, there are only a few times in which acceptable picture-making conditions are actually present. For all too many subjects that you experience on the fly, only a small percentage of them allow you the time, light, information or opportunity to do your best. And yet…you do what you must, and trust to instinct and chance for the rest.

Immediately upon arrival in a new town, my mind goes to one task, and one task only: sticking anyone else with the driving, so I can take potshots out the car window as I see fit. I have no need to head the posse or lead the expedition. You be in  charge, big man. Get me to the hotel and leave me to make as many attempts as possible to put something worthwhile inside my camera.

Of course, this means that I have to pay at least some attention to how insanely you drive…shortcuts, rapid swerves, jolts and all. And, hey, couldn’t you have lingered a millisecond longer after the light went green, since I was just about to create an immortal piece of street art, instead of the muscular spasm I now have frozen forever on my memory card?

When shooting from a car, there are lots of things that go out the window (sorry), among them composition, exposure, stability, and, most generally, focus. En route to L’Enfant Plaza in Washington D.C. a few years ago, I fell in love with the funky little tobacco shop you see here. The colors, the woodwork, the look of yesteryear, it all spoke to me, and I had to have it. So I shot it at 1/250 sec, more than fast enough to freeze nearly anything in focus, unless by “nearly anything” you mean something that you’re not careening past at the pace of the average Tijuana taxicab. Result? Well, I didn’t wind up with unspeakable blur, but it’s certainly softer than I wanted. Of course, I could have offered an acceptable alibi for the shot, something based on some variant like, “of course, I meant to do that”, that is, until I outed myself in this post, just now.

But we try. Sometimes it’s the fleeting nature of things seen from car windows that make the attempt even more appealing than the potential result. In that instant, it seems like nothing’s more important than trying to take a picture. That picture. I won’t get ’em all. But as long as I live, I hope I never lose that mad, what-the-hell urge to just go for it.

So okay, seeing as this is a photo of a tobacco shop, this is where one of you cashes in the “close, but no cigar” gag line.

Go ahead, I’ll give you that one.

NOT A LEG TO STAND ON 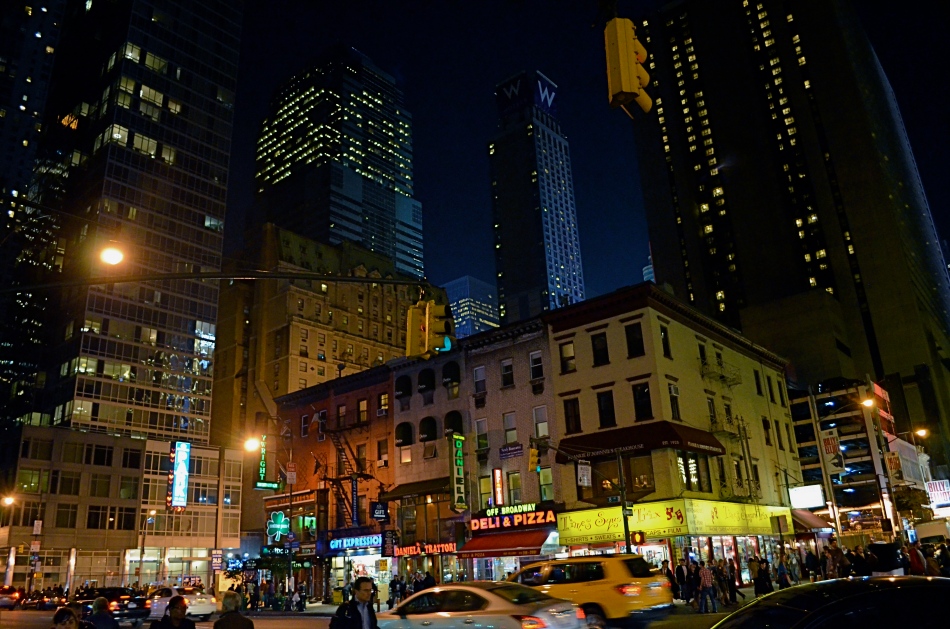 ADVANCES IN PHOTOGRAPHY, WHETHER IN THE SCIENCES OF LENSES, FILMS, SENSORS OR TECHNIQUE, ALL HAVE, AS THEIR AIM, THE SAME RESULT: to make it easier to take more pictures…more often, and with fewer barriers between what you see and what you can catch in the box. Taking more pictures means increasing the yield of wonderful pictures, even if 95% of what you shoot is doody, and getting to the decisive moment of the “click” beats any other imperative. Any gimmicks or toys that don’t increase your readiness to shoot are wasteful detours.

This means that we are constantly weeding out dead growth, trimming away systems or ideas that have outgrown their usefulness. Rusty ways of doing things that cost us time, require extra steps, and eventually rob us of shots.

And that’s why it’s the age of the tripod is nearly over.

Getting past our artistic bias toward the ‘pod as a vital tool in the successful creation of images is tough; we still associate it with the “serious” photographer, even though today’s cameras solve nearly all of the problems tripods were once reliable in offsetting. What we’re left with, regarding the tripod’s real value, then, is old brain wiring and, let’s face it, sentiment.

More importantly, to my first point, the tripod is not about, “Okay, I’m ready!”. It’s about, “Hold on, I’ll be ready in a minute.” Worse yet, to the petty dictators who act as the camera police in churches, monuments, retail establishments and museums, they scream, “you can’t be here”.  Call me crazy, but I still think of lack of access (spelled “getting kicked out”) as, well, sort of a hindrance to photography.

Tripods were, once upon a time, wonderful protection again several key problems, among them: slow film/sensor speed, vibration risk, and sharpness at wider apertures, all of which have long since been solved. Moreover, tripods may tempt people to shoot at smaller apertures, which could lead to softer overall images.

I readily concede that tripods are absolutely vital for extended night exposures, light painting, miniature work, and some other very selective professional settings. But for more than a century, ‘pods have mostly been used to compensate where our cameras were either flawed or limited. So, if those limits and flaws have faded sufficiently to allow you to take a nighttime snap, handheld at f/1.8, with a 1/15 shutter speed and the virtual guarantee of a well-lit shot, with negligible noise, why would you carry around twice the gear, pretty much ensuring that you would lose time, flexibility, and opportunities as a result?

The tripod has served us well, as was once true of flash powder, glass plates, even the torturous neck braces used to hold people’s heads in position during long exposures. But it no longer has a leg to stand on.